Last Friday, the weekly $600 federal stimulus boost ran out, impacting over 30 million Americans that are currently collecting unemployment. While a new round of stimulus is being debated, as many as 40 million Americans could lose their homes if no protections are put in place. Despite noise about “tense negotiations,” the government isn’t acting with the urgency necessary to protect citizens.

Not that the first round of stimulus went exceptionally well. The U.S. Treasury sent over one million checks, totaling $1.4 billion, to dead people. At least 43 companies with over 500 workers received assistance under the Paycheck Protection Act, which is above the requirement threshold. This included a number of chain businesses, some of which returned the money.

In one of the most surprising revelations, religious groups received up to $10 billion in relief, including the U.S. Catholic Church, which reportedly received as much as $3.5 billion in forgivable loans under the CARES Act. That stimulus money makes the organization, with over a billion followers and up to $30 billion in wealth, one of the biggest winners in the stimulus program.

The Archdiocese of New York was awarded at least $28 million for its top executive offices. Orange County churches received four loans worth at least $3 million. Another $2 million went to a West Virginia diocese that was under investigation just last year for sexual abuse charges.

It appears that having friends in high places helped out.

“Lobbied by religious leaders, the Trump administration went one step further by granting all faith groups a special waiver to the 500-employee cap. For the Catholic Church, that meant instead of all churches, schools, and other organizations in a diocese grouping their employees into a single total — making many ineligible due to their size — each could apply as an independent, ‘small’ entity.” 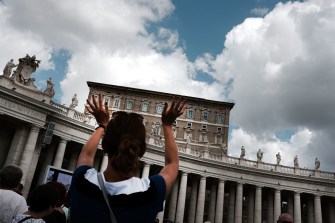 People wait for Pope Francis to give a short speech followed by the Angelus from the window of his apartment over St. Peter’s Square on September 02, 2018 in Vatican City, Vatican.Photo by Spencer Platt/Getty Images

Catholic institutions in America employ over one million people, over 200,000 more workers than on Amazon’s payroll. Quite a small business.

The Catholic Church wasn’t the only non-taxpaying entity to receive a boon. A campus ministry subsidiary of the Presbyterian Church of America received between $5-$10 million. Another $5 million went to Willow Creek Community Church, a megachurch whose longtime pastor was accused of sexual misconduct in 2018.

The First Baptist Church of Dallas received up to $5 million. The church’s leader, Robert Jeffress, believes abortion caused 9/11, gay sex can make you explode, and pedophilia and homosexuality are inherently related. Jeffress also sits on Trump’s evangelical advisory board.

Another 400 ministries received at least $1 million in forgivable loans under the CARES Act.

To reiterate, up to 40 million Americans may lose their home this year.

While churches already save $71 billion in tax relief every year, both Republican and Democratic proposals allow religious organizations to participate in the next round of stimulus funding.

Blessed are the meek, unless you have a lobbyist. Then you’re just blessed.

Our ‘little brain’ turns out to be pretty big