What if you found out that you’re alive today only because of the Holocaust? Discovering whether or not you’re of Genghis Khan’s stock is now a pastime, but what if that means many great-grandmothers ago your forebear was raped? How about this one: What if your death today resulted in the emergence of a world savior a century from now? Future generations would claim the sacrifice worthwhile. Would you?

Religious texts would idolize you as a great sacrificer, regardless of whether you actually wanted the cup taken from you. Contemplating the historical record requires masterful narration, first to suss out what is true, then to relay it in an engaging manner. Dan Carlin is one of the most gripping storytellers of our generation.

Since 2005, his podcasts, Hardcore History and Common Sense, have been downloaded more than 100 million times. While the opening episode of Hardcore History was just 16 minutes long, by the episode “Prophets of Doom” we were listening to the broadcast journalist for four-and-a-half hours straight.

Now we have another medium in which to hear, or at least read, Carlin. His first book, The End is Always Near: Apocalyptic Moments, From the Bronze Age Collapse to Nuclear Near Misses, asks the uncomfortable questions above (along with many others). It also offers insights into how to not make the mistakes of the past.

Fans have long asked Carlin to write a book. With a background in talk radio, podcasting made sense; nonfiction is another beast. As he told me during a wide-ranging interview, the creation of this book was a team project.

“I was in neophyte; my editors were going to teach me how to do this. They suggested a good way to start was to lay out all your past work on a big playroom floor where you have space and find commonalities between them. Obviously, I have a lot of material that never made it into the shows. It was like the old inkblot test from the psychologist where I never go back and look at old work. It was hard not to notice that the inkblots began to form a somewhat disturbing pattern in terms of my interests.”

Throughout the book Carlin utilizes the revelatory moment at the end of the original “The Planet of the Apes,” with the Statue of Liberty’s head sticking out of the sand — Dorothy was in Kansas all along — to remind us that history happens to everyone, all the time, and that we’re living through moments now without the ability to perceive where we’re heading.

He begins the book with another question — do tough times make tougher people? — then makes his case, starting with a chapter on the history of child abuse in Bronze Age (and later) cultures and working up to the existential dilemma we currently face with nuclear armaments.

The book itself isn’t so much a review of apocalyptic thinking as much as situations that empires have created over the last few millennia and how they’ve handled the dissolution of their reigns. Did Rome truly fall apart, or, “Did it transition to an equal yet more decentralized era, one with a more Germanic flair?” History compresses itself the further back we go; centuries are treated like months to suit our generally incapable brains from understanding the slow slog of time.

Don’t expect conclusions from this book, however. As Carlin repeats during our talk, he offers process, not solutions. In a world of endless bold pronouncements on social media, Carlin’s voice is refreshing. He’s revitalizing the lost concept of nuance. Sadly, in the age of hashtag activism this skill is broadly denounced. Yet you don’t have to agree with every point he makes. Education at its best offers tough questions and expects students (in Carlin’s case, listeners, and now readers) to work it out for themselves.

But we have to face this fact: in a world with Great Destroyers in the form of nuclear bombs just a phone call away, these questions need to be asked. 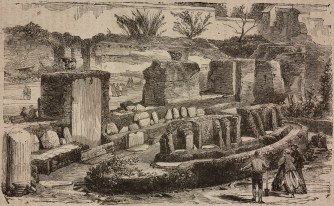 Ruins of the Palatine, the nymphaeum or hall of the fountains and the apse of the Triclinium in the gardens of Villa Mills, Rome, Lazio, Italy, engraving from Roma la Capitale d’Italia (Rome the Capital of Italy), by Vittorio Bersezio.

It comes down to our decision-making, not some pre-ordained apocalypse as many religious traditions espouse. This isn’t speculation, but an inherent part of our biology. The human brain’s hippocampus and entorhinal cortex, regions that process and store memories and perceive time, form the same network that predicts the future. We envision—we create—what’s ahead by our perception of we’ve experienced. In a sense, the future is our collective memories playing out in real-time.

The future is malleable, even when (sometimes especially when) we’re at the edge of a precipice. Therein lies one of the driving arguments of Carlin’s work: you can never know what will happen until we get there. It’s a fascinating realm of possibilities to contemplate.

The quick Twitter finger ready to fire a shot anytime one’s sensibilities are offended is paralyzed in this realm, as it requires, as in the great Socratic and Buddhist debate traditions, a willingness to grapple with all the possibilities. Carlin and I both come from local news reporting. Back in the eighties and nineties, newspapers hired one editor to write every reporter’s headline in order to avoid redundancy. The headline and lede offered a synopsis that introduced the reader to the heart of the story. Today the headline is often the only part being read.

I mention the tendency to immediately react based on headlines, the antithesis of nuance that often misleads one from grasping the actual story. Though there are benefits to everyone having a voice—nuance spreads in every direction—Carlin says,

“At least today, everybody kind of has an idea. We know what you’re going to say that’s going to get you in trouble. Those people [in the past] had no idea what the current standards were going to be for their past behavior, so they could not have complied even if they wanted to. For example, if a hundred years from now eating meat or driving cars gets your statue pulled down in the public square, how on earth could somebody have known that and and altered their behavior accordingly?”

History might not repeat itself—we also discuss on the nature of patterns—but it does, as Mark Twain (might have) said, rhymes. Understanding the circumstances of past cultures on their own terms (and not current standards) is vital in recognizing our social evolution as a species.

Future historiographers will have to contend with a deluge of misinformation. Carlin notes that false history has always been a problem, but imagine turning to Twitter a century from now to piece together our current political situation in America. Where to even begin?

“It’s a needle in a haystack problem. In the old days, there’s one haystack and one needle. Today there’s a million haystacks and a million needles. The problem that the historian is going to be much more about filtering rather than finding nuggets upon which to hang data points.”

Most hour-long transcriptions of my interviews produce roughly 5,000 words; Carlin’s was over 12,000. That’s why we love him. You’ll learn more in four hours of Hardcore History than most semester-long classes. The same holds for The End is Always Near, a book that should make its way into history classes nationwide.

Concluding a story is often more challenging than beginning one, because like history, it never actually ends. As with Carlin’s career, you keep processing as information arises and try to make the most well-informed decisions possible.

The best advice of all didn’t come from our talk, but from the last two lines in the book’s preface, a message that a hyper-individualized world needs to take to heart. Three simple words remind us that we all create history every day, and that what seems to be the biggest grievance in the world will be lucky to receive a footnote even a decade from now.

“Hubris is, after all, a pretty classic human trait. As my dad used to say, ‘Don’t get cocky.’

In awe of dying leaves

What can the beauty of autumn’s colors teach us about mortality?