It’s said to be delicious, but you probably haven’t encountered any durian fruit-scented candles. That’s because it smells, as the late gourmand Anthony Bourdain put it, “indescribable, something you will either love or despise…Your breath will smell as if you’d been French-kissing your dead grandmother.”

Eye-watering odor aside, Vincent G. Gomes of the University of Sydney and his colleagues have discovered that durian fruit has an amazing and potentially useful property: It’s a natural supercapacitor. In a paper published in the Journal of Energy Storage, Gomes explains that supercapacitors are “promising for energy storage due to their superior cycling stability and excellent charge–discharge ability.” Unfortunately, they also often suffer from low capacitance and stability. Stinky durian fruit and its cousin, jackfruit, don’t have those issues. 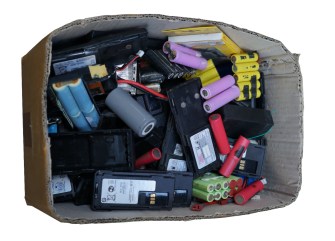 We need a better battery

Researchers have been trying to move away from existing lithium-ion batteries that contain chemicals whose interactions produce electricity. When those chemicals are depleted, what’s left is a little bundle of toxic waste.

A capacitor, on the other hand, stores energy by building up a static electricity charge on the surfaces of two metal plates. (You might think of how static electricity builds up on your hair when you rub a balloon against your head, for a sense of how this works.) However, capacitors can’t hold a lot of energy, nor can they hold it for long. Still, they are infinitely rechargeable, unlike lithium-ion solutions.

Supercapacitors begin to address some of these problems. They typically contain metal plates which have more surface-area and are coated with a second layer of activated charcoal or a similar material. This makes them better at soaking up and holding a charge. Still, supercapacitors are expensive to produce and have their own stability issues.

So now imagine one made of durian fruit or jackfruit. Gomes’ paper describes the potential:

“The structural precision of natural biomass with their hierarchical pores, developed over millions of years of biological evolution, affords an outstanding resource as a template for the synthesis of carbon-based materials. Their integrated properties of high surface area, in-plane conductivity and interfacial active sites can facilitate electrochemical reactions, ionic diffusion and high charge carrier density.”

The bodies of the fruit batteries are made of aerogels: durian carbon aerogel (DCA) and jackfruit carbon aerogel (JCA). The process of deriving them seems complicated, but hey, science is hard.

First, the researchers scrubbed small bio samples from the spongy core of each fruit. Next, the samples were rinsed with ionized water several times to clean them. Placed in autoclaves, they were steamed hydrothermally for 10 hours at 180° C. After cooling off, they were rinsed again and then freeze-dried in a -80° C vacuum over the course of 24 hours. Following that, they were heated to 800° C and held at that temperature for an hour. Overnight ambient cooling yielding black, highly porous, ultralight aerogels. Easy-peasy.

For electrodes, each DCA and JCA battery was fitted with two electrodes, and two different electrode arrays were tested.

The first array, designed to allow an electrochemical measurement of the batteries’ performance, incorporated a pair of glass substrates, each coated with an ink comprised of either DCA or JCA powder, respectively, and mixed with carbon black, polyvinylidene fluoride, or a PVDF binder.

The second electrode array used a pair of glass substrates coated with indium tin oxide, with a prepared PP (Celgard) separator between them. This architecture allowed appraisal of the battery’s gravimetric capacitance.

The paper concludes that “both electrodes are attractive candidates for the next generation, high performance, yet low-cost supercapacitors for energy storage devices derived from biowastes.” In both the DCA and JCA variants, “the electrodes…displayed long-term cycling stability, and rapid charge–discharge processes. ” It turns out that the durian fruit battery has a bit more power-storage capacity than its jackfruit cousin. The paper makes no mention of the final olfactory personality of the batteries.

In addition to offering proof of the potential for using durian fruit and jackfruit for energy storage, the authors point out that for the first time, they’ve demonstrated the development of carbon aerogels “via a facile, chemical-free, green synthesis procedure.”

Anything, good or bad, about Henry Ford can be contradicted — except his ambition and his work.
Hard Science

The war in Ukraine is unlikely to trigger a catastrophic nuclear meltdown. Physics and smart engineering are the reasons why.
Up Next
Starts With A Bang

Ask Ethan: Does The Aether Exist?

Not everything needs a medium to travel through. If we can overcome that assumption, we don’t need the aether at all.All throughout the Universe, different types of signals propagate. Some of […]