Bitcoin has taken investors for a ride in 2017, its price rising astronomically from less than a $1000 per coin earlier in the year to peaking at $20,000 by its end. It has its share of detractors and a recent price drop of 27% of its value underscores the unknowns and the volatility inherent to this 21-st century currency. Regardless, one person who probably benefited tremendously from the cryptocurrency’s booming popularity is its inventor, becoming the world’s 44th richest person on account of owning around a million bitcoins. The only problem is, we don’t know who that person is, or if they even exist at all.

The mystery surrounding the creation of Bitcoin is one of its unique characteristics. In 2008, someone named Satoshi Nakamoto published a paper online titled “Bitcoin: A Peer-to-Peer Electronic Cash System”. The paper, posted to a cryptography mailing list, described how the digital currency would work.

In 2009, Nakamoto released software for the currency, which utilized the concept of a blockchain as its core design component. The invention of the blockchain is an influential achievement in its own right as this technology, that uses a distributed ledger to record transactions between two parties in a verifiable and permanent way, has been adopted by other cryptocurrencies and is now even powering governments. 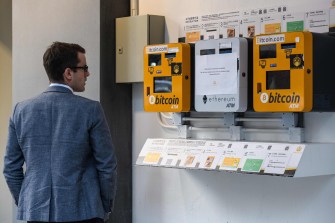 While he was so instrumental to the existence of bitcoin, also creating bitcoin.org in 2010, who Satoshi Nakamoto really was never became clear as all communication with him was online. In his profile, he claimed to be a Japanese man born in 1975, yet his perfect English had many doubting whether this identity was true. A number of people were pinned as being Satoshi Nakamoto over the years, like the Australian academic Craig Steven Wright but no one theory about him stuck permanently.

One person who could have created Bitcoin? Elon Musk. The notorious entrepreneur is so known for starting iconic and transformative tech businesses that eventually the internet pointed its finger at him. In fact, a Medium post by the former SpaceX intern Sahil Cupta pointed out a number of factors that could have connected Elon to Bitcoin.

As proof of the fact that the SpaceX CEO could have done it, he cites Musk’s polymath ways, with extensive knowledge in many varying fields like economics, cryptography and programming. Gupta also singles out the language of the original paper as similar to Elon’s, even conjecturing that the name “Satoshi Nakamoto” sounds made-up and could really be an anagram for the phrase “So a man took a shit” – the kind of less-than-adult humor Elon is sometimes prone to.

Responding to Gupta, Elon Musk flatly denied he created Bitcoin, sounding quite dismissive of the whole thing. “A friend sent me part of a BTC a few years, but I don’t know where it is,” he claimed in a tweet, as if to say it’s something that doesn’t even cross the field of his attention. 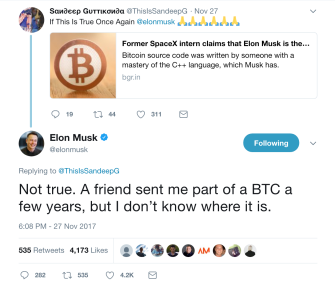 Surely, Musk is just the kind of person to create a world-changing technology on a lark and stay silent about it out of some conviction or simply because of not being sure if it would work. But for now, we’ll have to live with his word that it’s not him and wonder if the real Satoshi Nakamoto will ever stand up.

Bitcoin’s creator owns five percent of the entire Bitcoin supply, meaning that he has a larger percent of Bitcoin than the U.S. has of gold.
Up Next
Starts With A Bang

Ask Ethan: How Can I See The Quantum Universe At Home?

Do these five experiments right in your own living room, and explore some of the most baffling phenomena in all of nature.It’s a revolutionary idea that the Universe is made out […]