In late 2019, Dr. Li Wenliang, an ophthalmologist at the Wuhan Central Hospital in China, sent messages to colleagues warning of a potential SARS-like outbreak. Soon after, screenshots of the messages appeared elsewhere online. Li was reprimanded by Chinese officials for “spreading rumors,” and he signed a police document publicly stating that his comments “were not factual and broke the law.”

It didn’t take long for the public to learn the truth. By early February, at least 600 people in China had died of COVID-19, including Li. The Chinese government later declared him a martyr.

How much did this reversal cost the Chinese government, in terms of public trust? More broadly: Do governments lose credibility over the long term when what they call “fake news” later proves to be real?

That’s the key question of a new study titled “When ‘Fake News’ Becomes Real: The Consequences of False Government Denials in an Authoritarian Country.” 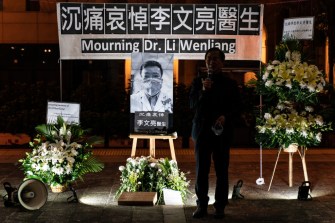 “The ability to label claims and explanations that the authorities deem objectionable as fake has long been regarded as a power,” the researchers wrote. “Because the revelation of the falsehood of government denials could erode the government’s power, it is important to investigate its consequences, particularly in the authoritarian setting.”

In the study, the researchers conducted a survey on three groups of participants. Each group was shown different information regarding a new automobile registration policy, and they were also asked general questions about demographic information and political interests. The study explains:

Each group then reported how much they believed in the initial rumor and the government denial. The denial and verification groups were also asked to rate their satisfaction with the government’s handling of automobile registration.

But do these effects last? After all, past research suggests that the effects of persuasive communication — say, a negative political ad smearing a candidate — tend to disappear within days.

To find out, the researchers conducted a follow-up survey three weeks after the first. This time, the survey included only two groups: the verification group from the first survey, and a group of new participants. Both groups were exposed to a rumor and then a government denial.

“The difference between the two groups was simply that one of them had previously experienced the revelation of the government’s false denial of an online rumor, while the other group did not have such an experience,” the researchers wrote.

The findings suggest that governments can lose credibility over the long term when they call something “fake news” but it later proves true.

“As discussed earlier, while authoritarian countries can be awash with rumors and fake news, it is less frequent for the government’s false denials to be caught due to the lack of independent news media and fact-checking organizations,” the researchers wrote.

Ultimately, calling “fake news” on negative information does seem to persuade some people. But it seems to be a costly short-term strategy, one that comes with the added cost of a dissatisfied public.

Ever wonder how LSD works? An answer has been discovered.

UNC School of Medicine researchers identified the amino acid responsible for the trip.