SESTA (Stop Enabling Sex Traffickers Act) and FOSTA (Allow States and Victims to Fight Online Sex Trafficking Act) were signed into law by former President Trump in 2018. There was some argument that this law may be unconstitutional as it could potentially violate the first amendment. A criminal defense lawyer explains this law in-depth in this video.

What did FOSTA-SESTA aim to accomplish?

The idea behind the law was simple: make it more difficult for online sex traffickers to find victims. FOSTA-SESTA started as two separate bills that were both created with a singular goal: curb online sex trafficking. Targeting websites like Backpage and Craigslist, where sex workers would often arrange meetings with their clientele, FOSTA-SESTA aimed to stop the illegal sex-trafficking activity being conducted online. While the aim of FOSTA-SESTA was to keep people safer, these laws have garnered international speculation and have become quite controversial.

According to BusinessWire, many people are in support of this bill, including the National Center for Missing and Exploited Children and World Without Exploitation (WorldWE).

“With the growth of the Internet, human trafficking that once happened mainly on street corners has largely shifted online. According to the National Center for Missing & Exploited Children, 73 percent of the 10,000 child sex trafficking reports it receives from the public each year involve ads on the website Backpage.com.”

As soon as this bill was signed into law, websites where sex workers often vetted and arranged meetings with their clients could now be held liable for the actions of the millions of people that used their sites. This meant websites could be prosecuted if they engaged in “the promotion or facilitation of prostitution” or “facilitate traffickers in advertising the sale of unlawful sex acts with sex trafficking victims.”

The bill’s effects were felt around the world — from Canadians being unhappy with the impact of this American bill to U.K. politicians considering the implementation of similar laws in the future.

Heather Jarvis, the program coordinator of the Safe Harbour Outreach Project (SHOP), which supports sex workers in the St. John’s area, explained to CBC in an interview that the American bill is impacting everyone, everywhere: “When laws impact the internet — the internet is often borderless — it often expands across different countries. So although these are laws in the United States, what we’ve seen is they’ve been shutting down websites in Canada and other countries as well.”

Jarvis suggests in her interview that instead of doing what they aimed to do with the bill and improving the safety of victims of sex trafficking or sexual exploitation, the website shutdowns are actually making sex workers less safe.

While one U.K. publication refers to FOSTA-SESTA as “well-intentioned but ultimately deeply-flawed laws,” it also mentions that politicians in the United Kingdom are hoping to pursue similar laws in the near future. 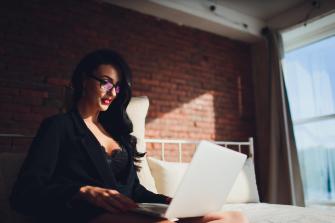 Is this really going to help, or is this bill simply pushing sex work and sex-related content further into the dark? Credit: Евгений Вершинин on Adobe Stock

While supporters of this bill have framed FOSTA-SESTA as a vital tool that could prevent sex trafficking and allow sex trafficking survivors to sue those websites for facilitating their victimization, many other people are strictly against the bill and hope it will be reversed.

One of the biggest problems many people have with this bill is that it forces sex workers into an even more dangerous situation, which is quite the opposite of what the bill had intended to do.

According to Globe and Mail, there has been an upswing in pimps sending sex workers messages that promise work – which puts sex workers on the losing end of a skewed power-dynamic, when before they could attempt to safely arrange their own meetings online.

How dangerous was online sex work before FOSTA-SESTA?

PivotLegal expresses concerns about this: “It is resoundingly clear, both from personal testimony and data, that attacking online sex work is an assault on the health and safety of people in the real world. In a darkly ironic twist, SESTA/FOSTA, legislation aimed at protecting victims of and preventing human trafficking for the purposes of sexual exploitation, will do the exact opposite.”

Websites are also being hypervigilant (and censoring more content than needed) because they can’t possibly police every single user’s activity on their platform.

Passing this bill meant any website (not just the ones that are commonly used by sex traffickers) could be held liable for their user’s posts. Naturally, this saw a general “tightening of the belt” when it came to what was allowed on various platforms. In late 2018, shortly after the FOSTA-SESTA bill was passed, companies like Facebook slowly began to alter their terms and conditions to protect themselves.

“Content that includes an implicit invitation for sexual intercourse, which can be described as naming a sexual act and other suggestive elements including (but not limited to):

– vague suggestive statements such as: ‘looking forward to an enjoyable evening’

Additionally, sections like this were also added, prohibiting things that could allude to sexual activity:

“Content in which other acts committed by adults are requested or offered, such as:

Facebook wasn’t the only website to crack down on their policies — the Craigslist classifieds section being removed and Reddit banned quite a large number of sex-worker related subreddits.

This is the question many people are facing with the FOSTA-SESTA acts being passed just a few years ago. Is this really going to help, or is this bill simply pushing sex work and sex-related content further into the dark? Opinions seem to be split down the middle on this — what do you think?

Democracy is in decline, regardless of how we measure it.
Up Next
Starts With A Bang

Ask Ethan: How Does The CMB Reveal The Hubble Constant?

We have two ways of measuring the expansion rate. Here’s the harder one.If you want to understand where our Universe came from and where it’s going, you need to measure how […]