Although incorrectly labeled the world’s oldest profession, prostitution has been on the minds of lawmakers for as long as extant laws allow us to track. The Code of Hammurabi, the most complete of ancient Babylonian laws, doesn’t deal with the sex trade directly but does distinguish between the inheritance rights enjoyed by “devoted women” versus prostituted women.

A few centuries later and across the Mediterranean, the ancient Greek and Roman civilizations regulated a legal sex trade depicted on frescos and black-and-red-figure vases in exotic and highly idealized terms. However, the courtesan’s life was hardly a high-minded exercise in sexual liberation. Freeborn wives and daughters did not participate in the sex trade. Instead, these societies filled their brothels with slaves and infames and allowed them to suffer in abhorrent living conditions. The ashen evidence from Pompeii reveals that prostituted women and young men were immured within dark, stifling cells barely large enough to house their stone beds.

In the United States today prostitution is entirely illegal, save for a few counties in the state of Nevada. Yet, trafficking persists across the country. One study from the Field Center for Children’s Policy, University of Pennsylvania, interviewed vulnerable youths across 13 cities and found that roughly a fifth were victims of sex trafficking. Many said they were approached for paid sexual acts during their first night of homelessness.

Opponents of the full-criminalization model argue that these regulations only aggravate such problems, driving prostituted people further underground, where harm and violence may be inflicted upon them without recourse. In recent decades, European countries have introduced new prostitution laws, leading U.S. advocates to raise their voices for decriminalization. And two new bills introduced in the New York State Senate hope to make that change. 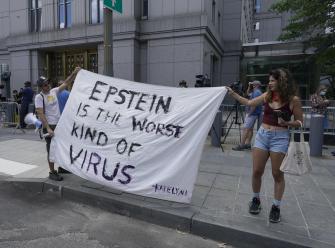 Advocates stand outside a courthouse to protest Ghislaine Maxwell, former girlfriend to Jeffrey Epstein, for her role in his sex-trafficking ring.Credit: Timothy A. Clary/Getty Images

The most recent of the two is the Sex Trade Survivors Justice & Equality Act. Set to be introduced by Senator Liz Krueger of Manhattan, the law would repeal the crime of prostitution in the state but would maintain punitive measures against buyers and pimps. The penalty for buying sex, for example, would be a sliding-scale fine based on income. The bill also aims to strengthen laws against trafficking and eliminate the so-called ignorance defense, which affords buyers legal cover if they did not have “reasonable grounds” to assume their victim was underage.

The Sex Trade Survivors Justice & Equality Act is based on the Equality Model, first introduced in Sweden in 1999. Under the Swedish Sex Purchase Act, the country decriminalized prostitution and began targeting buyers and suppliers with the goal of lowering demand. As demand decreased, the thinking went, Sweden would witness a subsequent reduction in violence, trafficking, and the trauma associated so strongly with the illicit sex trade. And a 2008 report did find that the strategy manifested some of those goals.

After the law’s introduction, costs increased, fewer men sought to purchase sex, and the number of women in street prostitution halved—though the burgeoning internet scene likely influenced that metric as much as the law.

As for Sweden’s prostituted population, the report was mixed. Fears of the law driving prostitution further underground weren’t realized, nor did the risks of physical abuse or dangerous living conditions increase. However, while people who sought to leave the life favored the law, those who wished to stay in the trade denigrated it for hyping the social stigma.

After the report’s release, countries such as Norway, Iceland, Canada, and Israel adopted the Equality Model, and today, many U.S. advocacy groups champion for states to institute similar laws.

“We who have been in the human-trafficking policy movement for a long time have been advocating for years that people in prostitution should not be criminalized for their exploitation,” Alexi Meyers, director of anti-trafficking policy at Sanctuary for Families, told Big Think in an interview discussing the New York bill. “It’s the only law where the victim is arrested. Instead of handcuffs, [people in prostitution] need services, need housing, need support.”

Critically, the Sex Trade Survivors Justice & Equality Act does more than decriminalize prostitution. It also bolsters social services such as housing, job training, and mental health care. To help finance these services, money collected by the aforementioned buyer fine will go into a victim-compensation fund. The bill also expands protections for minors arrested under safe harbor and would vacate victims’ prior convictions so they could more easily find jobs.

“When someone has had no family support, have been abused their entire lives, and they haven’t gotten the services they need, at the age of 18, they haven’t magically transformed from a victim of trafficking into a consenting adult,” Jayne Bigelsen, vice president of advocacy for Covenant House, New York, said in our interview.

Bigelsen grants that not everyone engaged in the commercial sex trade may view themselves as a victim, but she notes that a large portion of the population remains vulnerable nonetheless. To treat such people as criminals, as so many contemporary laws do, does no one any favors. The fear of arrest actively discourages victims from seeking an “off-ramp” to the life and strengthens the coercive hold their pimps and traffickers maintain on them.

“[The law helps] reframe the understanding that this is not a crime. It is a form of gender-based violence and exploitation. I think, over time, people will have a greater understanding of that,” Bigelsen adds. 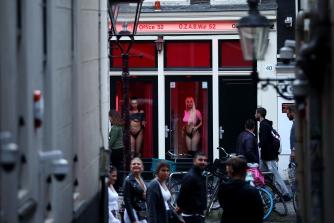 But critics of the Equality Model believe it’s disguised paternalism that robs women of the right to choose. Worse, they argue, it further stigmatizes sex workers within society and drives the sex trade further underground, where exploitation and violence can continue to fester from prying eyes.

A second New York Senate bill, currently in committee, would decriminalize the entire sex trade within the state. Called the Stop Violence in the Sex Trades Act, the bill would keep penal laws related to minors and sex trafficking but would make sex work between consenting adults a legal, regulated trade.

“Sex work is work and should not be criminalized by the state,” Senator Julia Salazar, who introduced the bill, stated in a press release. “Our current policies only empower traffickers and others who benefit from keeping sex work in the shadows. New York State needs to listen to sex workers and make these common-sense reforms to keep sex workers safe and empower sex workers in their workplaces.”

Like the Sex Trade Survivors Justice & Equality Act, Salazar’s bill draws inspiration from European laws, namely those from the Netherlands and Germany. Both countries legalized the sex trade a few years after Sweden introduced its Equality Model—though laws and regulations vary between the countries and even districts within them. For example, Germany has passed a law that requires any business offering sex services to apply for a permit “that will only be granted if health, hygiene and room requirements are met,” while Amsterdam limits window prostitution to specific city zones.

Full-decriminalization advocates hope such laws will facilitate freedom of choice, access to social services, improved health and working conditions, and the decoupling of the occupation from criminal enterprises. They also argue that full decriminalization closes the unintended consequences created by the Equality Model.

An Amnesty International report notes that in Norway, sex workers are routinely evicted from their homes because landlords fear rental agreements will expose them to prosecution for promoting sex. Similar liability concerns deter third parties, such as security, from working with sex workers, too. As a result, sex workers themselves may not be prosecuted but their lives are no less secure nor more firmly established within society.

“What we have isn’t working. The current model of criminalizing sex work traps sex workers and trafficking survivors in cycles of violence. The new proposed legislation referred to as the ‘Equality Model’ conflates sex work with sex trafficking, using the logic of broken windows policing to address trafficking by targeting sex workers,” writes the advocacy group Decrim NY.

Of course, Equality Model advocates have their arguments against full decriminalization. Even in countries that have legalized prostitution, the sex trade retains strong ties to criminal activities. Prostituted women continue to be viewed as pariah—or, in the case of Amsterdam, tourist attractions. And like the legal sex trades of the ancient world, contemporary examples have witnessed a surge in human trafficking to meet the demand. More often than not, poor women from poor countries.

“If you decriminalize people who buy sex, you’re removing any legal barriers or social barriers, and the number of people who buy sex will exponentially increase, and you’ll have to fill that new, legal demand with supply. And that supply is human bodies, and there aren’t enough willing participants to fulfill that need. That’s when trafficking occurs,” Alexi Myers said.

A report commissioned by Germany’s Federal Ministry for Family Affairs, Senior Citizens, Women and Youth looked into the effects of the country’s 2001 law. It found the intended impacts to be lacking. According to the report, the Prostitution Act did not create measurable improvements on social protection, working conditions, reduced crime, or the means for leaving the business. The report did assuage some fears, however, by finding that legalization did not make it more difficult to prosecute sex traffickers or related violence when they occurred.

All told, data will never point to a perfect solution to this or any social concern. In the case of prostitution, emotions and moral instinct run at the redline. Often, the solution one proposes comes down to one’s answer of this question: What is prostitution? Is it a violation of another human’s rights and dignity? An occupation like any other? Or a moral offense old as the law itself?

Whatever your answer, you’ll likely find current U.S. law lacking. It’s for this reason that many states are reanalyzing and revamping their prostitution laws to protect victims, usually with more robust safe harbor laws. Whichever law New York State chooses, its successes and failures will likely serve as a bellwether for the United States moving forward.

If you want to escape the negativity, head to Kazakhstan.
Up Next
Thinking

Can cats teach us the meaning of life?

And if they could, would they care, asks philosopher John Gray in his new book.