According to pop culture, weren’t there supposed to be more holograms by now? The 1970s and ’80s were full of holographic wishes. Back to the Future II told us that we’d have holographic movie trailers. A major Star Wars plot point involved a holographic Princess Leia. Even erstwhile cartoon pop star Jem’s backup band was called The Holograms. But in the 30+ years that your correspondent here has been alive — with the exception of a quasi-holographic Tupac Shakur at Coachella 2012 — we’ve been stuck with either tacky 2D holograms or projections onto gauze.

Until now. Brigham Young University is developing a technology called an Optical Trap Display that will allow projected object to exist in real space. To do so, the base releases a tiny opaque particle into the air and moves the particle in a predetermined path, illuminating it with a laser. If the particle moves faster than a certain speed, it gives the illusion of a solid object. If you speed the particle up even further, it creates the illusion of movement. >Still confused? Me too, and I’m the guy writing this. One easy way to visualize this process is to think about how a 3D printer scans an object and “draws” the outline. Try to imagine a single opaque particle doing all the work, and you have the basic idea behind the technology. 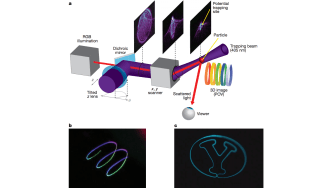 The good news? The tech is a lot more affordable than the elaborate set-up that bankrupted the Tupac hologram technology. The bad news? Right now, Brigham Young’s holograms are about as big as your fingernail, according to Gizmodo.

This is still incredible news for futurists. Once this OTD technology progresses, perhaps we’ll be able to see Blade Runner: 2049-style projections right on time in 2049.

Dr. Sara Walker is an astrobiologist and theoretical physicist, who is questioning the very nature of life and how we’re attempting to find it elsewhere.
▸
6 min
—
with
Sara Walker
Up Next
Technology & Innovation

Bill Gates is convinced that artificial intelligence will make our lives better and easier. Ummm …

Artificial Intelligence will change the nature of some jobs, and eliminate others. But will that be good for humanity? Bill Gates thinks so.