In 2007, Amazon and the U.S. engaged in virtually zero collaboration, and the company even fought a government subpoena for customer information related to a fraud case. But now, Amazon could soon become one of the government’s largest defense contractors, an unprecedented move that raises questions about the changing relationship between government and big tech.

Tech companies have spent years competing for the U.S. Department of Defense’s Joint Enterprise Defense Infrastructure (JEDI) contract, a cloud-computing deal reportedly worth $10 billion. The winner would be tasked with centralizing military information and providing access to cloud-computing services for various projects. For the massive deal, the government is seeking a single contractor, a decision that’s prompted no shortage of controversy.

“Single award is advantageous because, among other things, it improves security, improves data accessibility and simplifies the Department’s ability to adopt and use cloud services,” DOD spokesperson Heather Babb told TechCrunch.

Google dropped out of the running last year, and though Microsoft remains in the running, critics have said the contract appears “gift-wrapped” for Amazon, which already has a $600 million deal with the Central Intelligence Agency. In August, the Pentagon ordered a review of the award process after President Donald Trump said the deal appears to be rigged in favor of Amazon, whose Amazon Web Services is the largest cloud-computing provider in the world.

“It’s a very big contract,” said President Donald Trump in August. “One of the biggest ever given having to do with the cloud and having to do with a lot of other things. And we’re getting tremendous, really, complaints from other companies, and from great companies. Some of the greatest companies in the world are complaining about it.”

Besides favoritism, what are some of the concerns about the world’s largest retailer assuming such a powerful role over the nation’s most sensitive data? 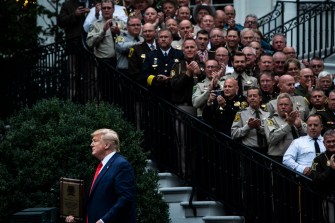 One concern is Amazon’s outlook on privacy, informed by how the company markets its facial recognition technology. Amazon has developed facial recognition technology that’s already being used in some U.S. police departments. Stephen E. Arnold, a specialist in intelligence and law enforcement software, told MIT Technology Review that he thinks Amazon’s push into local law enforcement is just the start of a larger strategy.

“Amazon wants to become the preferred vendor for federal, state, county, and local government when police and intelligence solutions are required,” Arnold said, adding that he predicts Amazon will then move on to international markets.

Amazon said in a statement:

“We feel strongly that the defense, intelligence, and national security communities deserve access to the best technology in the world. And we are committed to supporting their critical missions of protecting our citizens and defending our country.”

It’s worth noting that, compared to other Silicon Valley companies, Amazon seems relatively unconcerned about the potential problems associated with facial recognition technology, choosing to move forward with government collaboration while other companies have held back.

But perhaps the biggest consequences of the JEDI contract are the one that remain unpredictable.

“We seem to be racing toward a new configuration of government and industry without having fully thought through all of the implications. And some of those implications may not be entirely foreseeable,” Steve Aftergood, director of the Project on Government Secrecy at the Federation of American Scientists, told MIT Technology Review. “But any time you establish a new concentration of power and influence, you also need to create some countervailing structure that will have the authority and the ability to perform effective oversight. Up to now, that oversight structure doesn’t seem to [be] getting the attention it deserves.”

How can we fix America’s police?

Unstable politics and virtue signaling are responsible for creating bureaucratic nightmares.
Up Next
Communication

How brand evangelists can provide the ultimate word-of-mouth advertising

Any business owner wants to make sure they’re giving their customers an ideal experience. Not only are happy customers more likely to be repeat customers, but they can serve as […]