If you can remember back to high school civics or history, you’ll probably recall the standard story explaining why people decided to form states and governments. The state is often presumed to have come into existence when a group of people agreed to create it for the sake of their own protection. Upon seeing the success of civilization, those who had yet to joined society willingly came down from the hills to assimilate.

This idea is widespread but depends on a very rosy picture of civilization that is not based in fact for everyone. In the least, it’s not the full story. Indeed, one entire region of the world might be based on the opposite principle; that of people trying their darnedest to escape oppressive societies in the absence of more egalitarian ones. 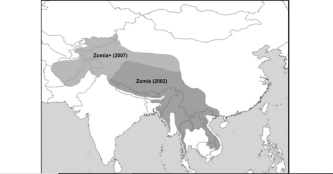 A map showing the various conceptions of the region of Zomia. Different authors have used the term to refer to different areas inside the grey zones above. Image source: Jean Michaud

The concept of Zomia, a swath of Asia stretching from the highlands of Afghanistan and Kyrgyzstan down through the Tibetan plateau all the way to the highlands of Vietnam filled with people whose cultures seem designed to avoid state control, is offered up by many historians and anthropologists as a counterexample to the conventional narrative given above.

First proposed by Willem van Schendel in 2002, the idea has been expanded on by several academics. The exact details of what places are included in Zomia can change, and some studies of the region reduce it to the highlands between India and Vietnam bordered by China to the north. Most authors agree that the areas included are all high up and some specifically limit it to areas at least 300 meters above sea level.

The peoples in this vast region — it covers nearly a million square miles in the largest incarnations — are very different from one another. They speak a wide variety of languages, worship different gods in a multitude of ways, and have come up with unique solutions to living in areas that the larger civilizations of the world have avoided. Of the few things they actually do share is an origin story of avoiding the world below as well as a few cultural adaptations designed to keep it that way.

Why the Internet Is the Greatest Achievement of Any Civilization, Ever | Virginia Heffernan

Why would they run away from civilization? Isn’t it wonderful?

In the book The Art of Not Being Governed, Professor James C. Scott argues that life in the classical states of southeast Asia wouldn’t have been all that great and that fleeing to the highlands, which were conveniently inaccessible to the armies of the country they were running from, was both common and attractive.

He rejects the notion that people who failed to join states were barbarians in this section of the book:

There is no reason, then, to assume that hill swiddeners and foragers are isolated in the hills by default or by virtue of their backwardness. On the contrary, there is ample reason to assume that they are where they are and do what they do intentionally. This is, in effect, the historic choice made by many former plains-dwellers who fled to the hills when oppressed by ruinous taxation or threatened with servitude by a more powerful people. Their intentions are inscribed in their practice, in the sense that they have not chosen, as have others, to assimilate into lowland societies. One of their intentions, it appears, is to avoid capture, as slaves or subjects, by states and their agents. . . . Nor should we overlook the attraction of the autonomy and the relatively egalitarian social relations prevailing in the hills, as important a goal as evading Corvée and taxes.

The idea flips our notions of how civilizations evolve and why some people are still outside of it. Rather than people flocking out of the hills towards the cities, Scott shows us examples of people leaving the cities for the mountains when taxes got too high, conscription rates took too many people, or the threat of forced labor became too much to bear.

He further suggests that the cultures of many of these people evolved as opposites to the state and its onerous burdens. He gives such examples as their egalitarian societies, easily moved agricultural practices, and their placement of settlements in inhospitable areas that were hard for the armies of the civilized world to reach.

This does make sense as, in a way, they would be societies of refugees from the Chinese, Vietnamese, and Thais. Why copy what you’re running away from?

Are there any other examples of this idea other than in Asia? Is there any real evidence for this?

Other examples of societies like the ones that supposedly populate Zomia can be found around the world. The Cossacks on the steppes of southern Russia had many ex-serfs join their ranks in their flight from the oppression of Russian society. Anthropologist Pierre Clastres explained how In Latin America there are several groups of people who rejected civilization in favor of their own way of life which involves less work and more time to enjoy life.

Thus, the idea that people might choose to flee repressive civilizations for a free life in the hills or wilderness is hardly inconceivable. However, the group of people who are defined by trying to get away from civilization would also be the people who might not write things down. Therefore, hard, written evidence for exactly why the people of Zomia came to be there is improbable to surface.

Nevertheless, several outside observers without ideological attachment to the concept might be of help here. One Catholic clergyman, for instance, reached the same conclusion as the modern anarchist historians way back in 1800 when he observed the people of Burma. In his book The Burmese Empire, the clergyman described why some people looked to flee the society they had lived in all their lives for greener pastures:

Unable any longer to bear witness to the heavy oppressions and continual levies of men and money made upon them have withdrawn themselves from their native soil, with all their families…

There are, of course, several academics who disagree with the whole idea or argue that the image Scott puts forth is romanticized. For example, professor Jean Michaud explained that while “the general road map he is suggesting makes sense, to a degree,” there are plenty of examples of the highland peoples creating feudal states of their own.

Is there a land of Zomia? Where one hundred million people fled to avoid the horrors of civilization and continue to live on the edge of the civilized world? Perhaps, perhaps not. The idea is intriguing, however, in terms of how civilizations came to be, and it warrants discussion. When a civilization becomes too oppressive is it all it’s cracked up to be?

America might be in the throes of a loneliness epidemic, but cultivating wisdom can help.