The Taigh Chearsabhagh Museum & Arts Centre sits in a hauntingly beautiful place, at the sea’s edge in a tiny Scottish village. The name of this Outer Hebrides place is Lochmaddy, and it can be found, for now, in the low-lying archipelago of Uist off the country’s west coast. It looks like a place the world forgot. But now, a new outdoor light installation chillingly illustrates the likely fate of communities such as Lochmaddy as Earth’s warming seas rise. 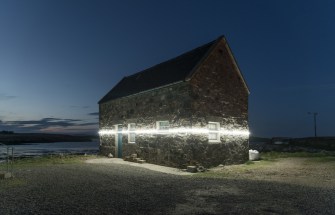 Named for Lochmaddy’s latitude and longitude, Lines (57° 59N, 7° 16W) is the creation of two Finnish artists, Pekka Niittyvirta and Timo Aho. They’ve constructed horizontal LED arrays above low-lying areas and bridges that will be submerged if the Earth’s temperatures continue to rise, and at corresponding high-water locations on the sides of endangered structures.

Floating sensors switch the LEDs on at high tide each night, bright, painful incisions in the otherwise peaceful dark. It’s a troubling sight, not least due to the incongruous appearance of such a futuristic-looking intrusion in such a serene setting. A sad one, too, making starkly clear what’s about to be lost if we don’t act quickly to save the places we love too much to lose. 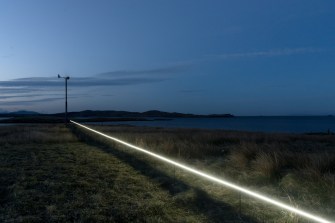 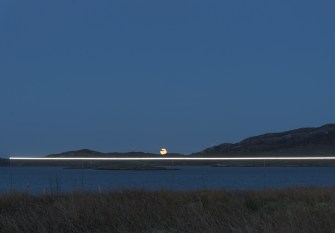 To be successful at bonsai cultivation, you must acquire the perseverance and unconditional kindness normally reserved for devout monks.
Up Next
Strange Maps