By now, everybody has heard of solar and wind energy. You’re probably familiar with hydroelectric energy as well, and maybe even geothermal energy. But few are familiar with osmotic energy.

Osmotic energy plants are fairly rare as one of the key components in their use — a semi-permeable membrane — tends to break down, requiring frequent replacement and driving up operational costs. Now, new research has uncovered a better, more durable membrane that may lead to significantly better returns for this kind of renewable energy. 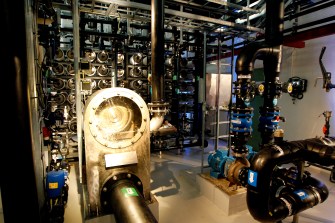 An image taken inside of the world’s first osmotic power plant at Tofte, Norway, 2009. The project has since been shelved due to its high operating costs, highlighting the need for better, more efficient technology.

What exactly is osmotic energy?

Osmotic energy takes advantage of the differences in pressure and salinity between fresh and seawater to generate electricity. Its only waste product is brackish water, which is simply water that is saltier than freshwater but less so than seawater. While it doesn’t generate large amounts of energy compared to other renewable energy sources, it is remarkably consistent. The energy derived from wind turbines and solar panels fluctuates tremendously with the weather, time, and local climate, but osmotic energy works more or less the same year-round wherever fresh and saltwater meet.

Osmosis, in general, is the process by which liquid moves from a dilute to a concentrated solution through a semi-permeable membrane. It occurs in your body all the time, as its critical for fundamental biological processes.

Osmotic power plants typically use one of two major techniques. In pressure-retarded osmosis (PRO), freshwater is gathered in one tank while saltwater is kept in another. In between, a membrane separates the two. This membrane has special properties that only permit freshwater to pass through, but not saltwater. As a result, the freshwater is drawn through the membrane, diluting the saltwater in the corresponding tank but also raising the pressure. From this pressure, we can derive energy.

The other technique, reverse electrodialysis osmosis (RED), takes advantage of the fact that saltwater contains more positive and negative ions than fresh water. Normally, these ions would travel into the freshwater, balancing out the solution. But when harvesting osmotic energy, a membrane can selectively allow only the positive or negative ions to pass through, turning tanks of salt and fresh water into a kind of battery that passively generates electricity.

Inspired by bone and cartilage

But the reason why we don’t see more of either of these plants is because of the membrane. Osmotic membranes are delicate and must retain specific characteristics in order to remain semi-permeable. Exposed to the elements, they tend to degrade over time.

Recent research described in the journal Joule presents a new, durable membrane inspired by bone and cartilage that lasts. This membrane would be used in RED applications.

Bone is a very strong material, but it doesn’t permit the transportation of ions, while flimsier material like cartilage permits ions to pass through easily. A membrane for osmotic energy would require both strength and the ability to transport ions.

The researchers found that not only does this generate power to a similar degree as commercial RED osmotic power plants, but it also performs for a remarkably long time. They cycled the membrane 20 times, observing its efficiency over the course of 200 hours, and found no drop in performance whatsoever.

Moreover, the membrane can function well in a wide range of pH and temperatures. Other membranes only perform well under specific conditions and need to be regularly replaced, increasing the amount of energy they require to be maintained. Implementing a more durable, longer-lasting membrane in a power plant would mean in effect that the plant could generate more power, as it would require less energy to maintain.

While the study only served as a proof of concept, it does show that we’re getting better and better at addressing the problems with renewable energy. Not only that, but it highlights how much energy available to us is out there — so long as we’re willing to think creatively and look in the right places. With any luck, we might start to see more osmotic energy plants operating at the mouths of the world’s rivers.

The biggest nuclear blast in history came courtesy of Tsar Bomba. We could make something at least 100 times more powerful.
The Future

Scientists turn to nature to improve a ubiquitous building material.
The Future

Graphene is a Nobel Prize-winning “wonder material.” Graphyne might replace it

A two-dimensional material made entirely of carbon called graphene won the Nobel Prize in 2010. Graphyne might be even better.
The Future

In paint form, the world’s “whitest white” reflects so much light that surfaces become cooler than the surrounding air.
Up Next
The Present

Scientists can now predict at birth who will have academic success

Study identifies predictors of which students are likely to do well in education.