Natural hazards like hurricanes and wildfires may pose increasing threats to the U.S., and it’s not just because climate change is helping to make extreme weather phenomena more common. Risky human development is also boosting risks.

That’s the takeaway of a recent study published in the journal Earth’s Future, which aimed to map out areas of the contiguous U.S. where natural hazards pose the highest risks to people and structures.

The study found that 57 percent of structures — like homes, schools, and offices — are located in “hazard hotspots,” which cover about one-third of the nation. The hotspots are defined as areas where the likelihood of an earthquake, wildfire, flood, hurricane, or tornado falls in the top 10 percent. About 1.5 million structures are located in hotspots where multiple hazards are especially likely.

“These critical levels of exposure are the legacy of decades of sustained growth and point to our inability, lack of knowledge, or unwillingness to limit development in hazardous zones,” the researchers wrote. “Development in these areas is still growing more rapidly than the baseline rates for the nation, portending larger future losses even if the effects of climate change are not considered.”

Earthquakes and fires and floods, oh my!

Nature has taken a toll on the U.S. Between 1960 and 2015, natural disasters killed at least 32,000 people and cost the nation about $850 billion. While the authors note that economic losses from natural hazards are “escalating dramatically” despite a decade-long pattern of slowing development across the U.S., it’s worth noting that in recent decades natural disasters have been killing fewer people than ever before.

In any case, a better understanding of risky developmental patterns is key to mitigating future risks posed by natural hazards, the researchers noted. 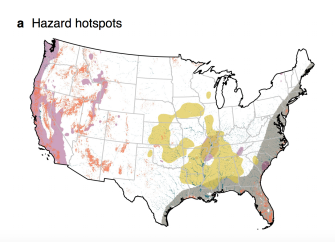 To map out natural hazard risks, the researchers combined property and housing data from Zillow with natural disaster risk models based on information from sources like the U.S. Geological Survey (USGS) Earthquake Hazards Program. The results highlighted risky developmental patterns that vary by region and type of hazard. For example, expanding into previously undeveloped land increases exposure to hazards like tornadoes, floods, and wildfires, while adding more people and structures to certain urban areas can boost risks related to earthquakes and hurricanes.

Sometimes development can decrease one type of hazard risk but boost another. For example, some riverside cities are expanding far beyond their floodplains, which means new suburban developments don’t face significant flood risks. However, the expansion of people and structures into these more flammable landscapes increases exposure to wildfires.

“This relatively recent, compound phenomenon suggests potential for significant increase in wildfire loss in the near future,” the researchers wrote.

This “compound phenomenon” is a good example of how developmental patterns and climate change can boost hazard risks: rising temperatures are causing drier conditions and therefore more wildfires. Meanwhile, more people are moving into flammable landscapes.

The researchers hope that better data can help policymakers and other researchers develop better hazard mitigation plans. Specifically, they noted that “fine-scale” data can help planners avoid the “levee effect,” which describes how efforts to protect ourselves against natural disasters can backfire with unintended consequences.

Recent research suggests that Earth’s magnetic field bounced back just as complex life was starting to emerge on our planet.
Up Next
Starts With A Bang

Following The Scientific Consensus Is The ‘Least Wrong’ Line Of Thought

All scientific theories, at some level, are wrong. That’s why consensus is so vital.There are two important and common words that, when used scientifically, have a very different meaning than how […]