In 2018 cOAlition S launched an ambitious program: to make all of the world’s state-backed scientific papers open-access. Their agenda, Plan S—the S stands for “shock”—is backed by over a dozen European research agencies and funders.

While the group has fallen short of achieving their stated agenda by 2021, they’re certainly making strides. Just this week, 160 Elsevier journals, including renowned publications by Cell Press, are registered as “Plan S aligned Transformative Journals.” This could be a good move by Elsevier, which has been severely criticized in the past for price gouging practices—although critics cite increased researcher fees as a cause for alarm.

Unlike the 10-year-old Sci-Hub, which houses over 85 million research papers and regularly changes URLs to avoid the legal ramifications of providing access to paywalled studies, cOAlition S is changing the journal system from within. Their 10 principles call for greater autonomy for researchers conducting scientific studies and having publication fees covered by universities, not researchers. The latter could prove pivotal, as publication budgets are often no match for journal fees.

In just three years, cOAlition S has gained the support of the World Health Organization, the European Commission, and research institutions and agencies in China, Sweden, France, Jordan, and the United States, including the Gates Foundation and Howard Hughes Medical Institute. While many journals initially opposed this agenda, a few have come around. Bureaucratic red tape and inflated prices have hamstrung science for decades. Plan S is not a perfect solution, but it’s the closest we’ve seen.

How do you feel about Plan S and open access?www.youtube.com

Science’s associate news editor Jeffrey Brainard breaks down how open access works for authors. Publishing studies is an essential part of a researcher’s career, bringing with it the potential for career advancement, tenure, peer respect, and, occasionally, popular renown. But it comes at a cost.

Golden open access is one model used by journals such as The Lancet Golden Health, which charges researchers up to $5,000 to make their studies open access. Nature publications now clock in at up to $11,600 and Cell charges $9,900, though the median fee for journals is $2,600.

Pay-to-play doesn’t only exist in music. The more respect a journal carries, the higher the fee.

When Springer Nature, publisher of the reputable Nature journals, announced it was adopting a Plan S option last month, the editorial team announced the $11,600 fee was mandatory for anyone requesting their articles be made open-access, regardless of their financial status. These journals are notoriously expensive: submitting an article for consideration costs roughly $2,700 with no guarantee of publication. One journal, Nature Physics, rejects 90 percent of submissions.

cOAlition S executive director Johan Rooryck expressed happiness that Springer Nature is now offering an open-access model but stated “that doesn’t mean we have signed a blank check and are willing to pay any price for the articles appearing in those journals.”

Springer Nature has also adopted a model more in alignment with Spotify: universities and research institutions pay a single fee to publish their authors. Some publishers offer a hybrid approach: some articles are free while others live behind a paywall. There are also embargo models, where authors can offer their papers to the public free of charge after a six-month or year-long waiting period. 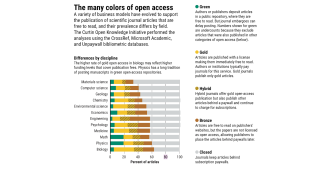 The cost to publish remains prohibitive for some researchers, with certain journal prices for one article exceeding annual budgets. This has forced many researchers to confront an existential question: publish behind a paywall and wither in obscurity, or pay up and hope enough people read (and cite) your work.

While inflated journal prices have plagued the scientific community, Brainard notes that a purely open-access model could place even more of a burden on researchers.

“A complete shift to open access could lead publishers to boost publishing fees even further, to try to make up for lost subscription revenues[…] Although just over 30% of all papers published in 2019 were paid open access, subscriptions still accounted for more than 90% of publishers’ revenues that year.”

cOAlition S is advocating for increased transparency to push back on price gouging. Just as researchers must disclose funding and conflicts of interest, “Plan S requires publishers to disclose to funders the basis for their prices, including the cost of services such as proofreading, copy editing, and organizing peer review.”

Although Brainard briefly mentions an increase in the number of non-researchers and institutions—laypeople—reading open-access journals, this topic is relevant to this conversation. America is suffering from a longstanding dearth of public science information, evidenced in the anti-vax fervor that’s growing in volume (if not in numbers) since the introduction of the COVID-19 vaccines.

Access to scientific studies won’t solve all of our woes. But lack of transparency is a major reason why so many citizens have grown suspicious of pharmaceutical companies and public health agencies. An ability to read studies without having to pay exorbitant prices (to the layperson) would be an important step in public health and science education.

Inequality should be measured in terms of the time it takes for us to earn the money to buy the things we need. And everyone is getting wealthier.
Sponsored

How to recession-proof your finances

With economic turmoil looming, everyone wants a way to keep their funds safe. But is that really possible?
Strange Maps

These ten maps provide a fascinating insight into the impact that soccer (sorry, football) has had worldwide.
Up Next
Health

A new antibiotic hits germs with a two pronged attack.