On Sept. 28, 1998, Nintendo released Pokémon in the United States and dared us to try to catch ’em all. We eagerly accepted the challenge. The first Pokémon games, Red and Blue, netted Nintendo $70 million stateside in their first six months. Worldwide the first generation of Pokémon games, including Yellow and Green, sold more than 45 million copies combined.

Guess not. Twenty years later, the games have sold more than 300 million units, the TV show airs in 124 countries and regions, and about 550 companies license the rights. As of March 2017, the Pokémon market size is worth more than ¥6 trillion (roughly $53 billion).

To celebrate the 20th anniversary of the Pokémon invasion, let’s look back at five ways these Japanese pocket monsters influenced the United States.

Pokémon‘s influence in the West began a full year before the first games were released stateside. In 1997, the Pokémon TV show entered our cultural consciousness by sending children to the hospital. (Not the most auspicious start for a product aimed at children.)

An episode of the show, titled “Dennō Senshi Porigon,” sent several people into epileptic fits, and hundreds of children were rushed to the hospital. Some vomited blood, while others lost consciousness.

“I was watching TV but I [couldn’t] remember anything at all when it was all over,” one of the children said of the incident. “As I was watching blue and red lights on the screen, I felt my body becoming tense. I do not remember what happened afterward.”

These red and blue lights flashed at a frequency that triggered seizures in people with a condition called photosensitive epilepsy. Photosensitive epileptics have primary visual cortexes that are easily excited, and lights flashing between 5 and 30 times per second, like those featured in the episode, can induce seizures.

Nearly 700 people went to the hospital, but further research showed that only a handful actually suffered photosensitive seizures. By then, however, the story had already gone international and been dubbed the “Pokémon Shock” incident.

Although we had known about the condition years beforehand, the panic brought it widespread attention. Today, companies regularly put warnings on entertainment products that feature such effects, and New York State has enshrined such warnings in law. Thanks to social media, companies that don’t provide warnings are quickly reminded of their responsibility to do so.

As for the infamous Pokémon episode, it never came stateside nor has it ever been rebroadcasted in Japan. 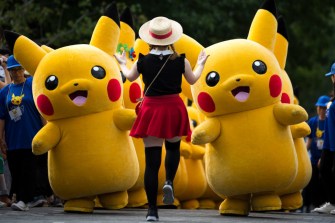 A total of 1,500 Pikachus appear at the Yokohama landmarks in the Minato Mirai during the Pikachu Outbreak event on Aug. 10, 2018

When Pokémon reached the United States, parents quickly forgot to worry about their children’s health and instead indulged in another all-American pastime: the moral panic. Pokémon became the de facto activity that was corrupting children’s lives, but this time, we were importing it from another country.

Parents accused Pokémon of promoting violence and leading children down the immoral path. Some even filed suit against Nintendo, claiming the trading cards were an “illegal gambling enterprise” design to create ankle-biting addicts.

“In my opinion parents should not let their kids watch Pokémon, play Pokémon, buy Pokémon cards, or have anything whatsoever to do with Pokémon,” psychiatrist Carole Liberman told MSNBC back in 1999. “Because the message is violence.”

America wasn’t alone, though. Saudi Arabian religious authorities accused Pokémon of possessing the minds of children and issued a fatwa against the games.

“Parents who have had to suffer through the games, the TV series and shopping trips can take some comfort in the fact that the Pokémon demographic is the same one that has abandoned Teenage Mutant Ninja Turtles and Power Rangers,” proclaimed Howard Chua-Eoan and Tim Larimer in Time. “It’s all Pokémon, all the time. At least until the next craze.”

Twenty years later, we’re still waiting for that next craze, but at least the parents have chilled out.

Anime has been a part of American culture for decades. In the 1960s, NBC brought Mighty Atom to the United States under the auspices of “Astro Boy.” In the late ’80s, Akira became an obsession for midnight moviegoers. But it wasn’t until the late ’90s that anime finally broke into Western pop culture to become a mainstay in its own right.

The Pokémon TV series helped introduce an entire generation of youngsters to kawaii-eyed protagonists, online debates over power scaling, and characters that move so fast the background can’t keep up. Other important anime of this era included Dragon Ball Z for adolescent boys (and honestly girls too), Sailor Moon for adolescent girls (and honestly boys too), Cowboy Bebop for the adults, and Neon Genesis Evangelion for…well, you know who you are.

Anime may not be mainstream today, but it is certainly on its way. Spirited Away won an Oscar in 2003 (even if the genre has been snubbed ever since). American cartoons such as The Last Airbender have drawn heavily from anime influences. And Crunchyroll, a streaming service dedicated to anime, has more than 20 million registered users.

While Pokémon may not be solely responsible for anime’s foothold in the West, it was certainly among the vanguard of that important late ’90s push. 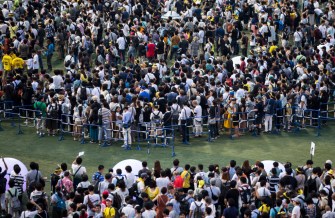 Get up and Go

In 2016, Niantic launched Pokémon Go. The game uses augmented reality to let people catch Pokémon in their own neighborhoods, and we cannot get enough. Twenty-one million people downloaded it in its first three weeks, and videos of users stampeding by the hundreds in search of that rare find flooded the Internet.

In addition to being hugely popular, the game helped draw interest to what could be accomplished by marrying gaming with advancements in technology. A study in the Journal of the American Heart Association suggested that participation in Pokémon Go “was associated with a significant increase in [physical activity]” and that similar forms of gameplay could help promote healthy activities in people attracted to games.

It was also showed the shifting dimensions of gaming in contemporary culture. More women play the game than men or children, and it is augmented reality’s first killer app. During a talk with Big Think, journalist Virginia Heffernan argued that the game even shared the hallmarks of art.

“When people venture into those wide boundaries outside the narrow confines of where you’re kept in a safe spot with other apps, Angry Birds say, you are going to take risks,” Heffernan said. “And art asks us to take risks, literally asks to move us from one place to the other, exactly the way Pokémon Go has been moving us all over the world.

While Pokémon Go has fallen from the height of its popularity, predictions of its inevitable obsolescence seem as premature as similar prophecies from 1999. The game still pulls 20-plus million daily active users, and events like the appearance of a never before seen Pokémon continue to draw users back in.

Before Pokémon, franchises allowed children to collect toys and play as their favorite heroes. They could pretend to be Captain Kirk and learn all the ins and outs of the USS Enterprise, for example, but there was always a sharp dividing line between the world of Star Trek and their own.

Pokémon made this divide far more porous by mixing the franchise with role-playing elements. Children weren’t just pretending to be Pokémon masters; they were becoming Pokémon masters by collecting the creatures, learning about their strengths and weaknesses, and memorizing rules that were just complex enough to be fun yet not daunting.

“Pokémon isn’t just a game about cute animals fighting one another. That gives it a certain amount of initial appeal, but it earns a last [sic] attraction by offering up an esoteric rule set that is simultaneously simple enough for kids to understand while cryptic enough to confuse parents,” writes Jeff Grubb.

Grubb continues, “For many kids, this is one of the first chances they’ll get to feel like a true expert on a subject, and that’s a critical step in growing into an adult. You need to know that you have the capacity to learn something that even your parents cannot grasp.”

Pokémon offered children the opportunity to not simply play as something, but to invest in it in the same way adults come into their own profession: by learning and by actively engaging in it. 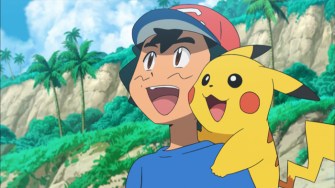 Photo by The Pokemon Company International

Here’s to another 20 years

Before Pokémon, Americans were no strangers to collection crazes. Parents rioted over Cabbage Patch Kids in the 1980s, and the early ’90s saw adults trample each other to acquire Beanie Babies. Nor were we unaware of the franchise marketing blitz. Star Wars proved that attaching the name of a popular franchise to anything was the corporate equivalent of inheriting a mint.

But what made Pokémon so special that it became the highest-grossing media franchise in the world?

Simply put, it was fun and the kind of fun that could grow with children. Twenty years ago, trainers had to capture 151 Pokémon. Now there are 806 of the abstract beasties. With new Pokémon comes new game mechanics that create ever more complex interactions for children to master, while maintaining that approachable core rule set.

And as the original trainers have grown up, they’ve introduced Pokémon to their own children and rediscovered the game themselves. This has resulted in a cross-generational experience shared by adults and children. As NPR reports, competitions in game stores can sport players aged 8 to 38.

If it looks as though Pokémania has died out, that’s only because we’ve acclimated ourselves to it. In truth, these Japanese pocket monsters have become a much a part of American life as cowboys, Superman, and Mickey Mouse.

Here’s to another 20 years and the next generation of Pokémon trainers!

Single-atom data storage has just been figured out