In his message for 2018 World Communications Day, Pope Francis rallied to the defense of journalism—if not the news media—comparing fake news to the snake in the Garden of Eden for its misleading, destructive power. This is a valuable, clear-eyed message for anyone, regardless of belief system. And to be clear, the pope’s not talking about fake news as defined in White House press briefings or presidential tweets. He has something very different—nearly the opposite—in mind:

“In general, it refers to the spreading of disinformation online or in the traditional media. It has to do with false information based on non-existent or distorted data meant to deceive and manipulate the reader. Spreading fake news can serve to advance specific goals, influence political decisions, and serve economic interests.”

The Pontiff’s annual message is in honor of the feast of St. Francis de ‎Sales, patron saint of journalists, in whom the Pope sees our best defense. “A weighty responsibility rests on the shoulders of those whose job is to provide information, namely, journalists, the protectors of news.  In today’s world, theirs is, in every sense, not just a job; it is a mission.” He also recognizes the pressures that may cause news outlets to fail, reminding journalists that “they must remember that the heart of information is not the speed with which it is reported or its audience impact.”

Separating truth from lies, however, can be hard for journalists — and anyone else — says the Pope, since fake news uses “deliberately evasive and subtly misleading rhetoric and at times the use of sophisticated psychological mechanisms.” He points out that its use of goes way back to the Garden of Eden when the Snake provokes Eve by asserting something only partly true: “Did God really say you were not to eat from any of the trees in the garden?” Though Eve corrects him, saying God spoke of only the Tree of Knowledge, she’s nonetheless taken in by the appeal inherent in his subterfuge, clinging to his words, “You will not die!” before taking her fateful bite. After all, the Pope warns, disinformation can so subtly work in listeners’ minds “that even authoritative denials fail to contain the damage.” 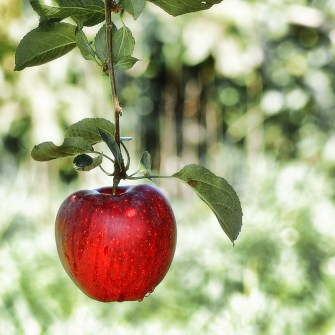 Francis’ message describes a diabolical foe dependent on a human weakness that allows it to multiply quickly, and its horrible cost:

“What is at stake is our greed.  Fake news often goes viral, spreading so fast that it is hard to stop, not because of the sense of sharing that inspires the social media, but because it appeals to the insatiable greed so easily aroused in human beings. The economic and manipulative aims that feed disinformation are rooted in a thirst for power, a desire to possess and enjoy, which ultimately makes us victims of something much more tragic: the deceptive power of evil that moves from one lie to another in order to rob us of our interior freedom.”

Fake news works so well thanks to two attributes in particular, says the Pope:

And our own personally curated social media filter bubbles unfortunately do more than simply block out people we don’t agree with, according to the Pontiff:

“Disinformation thus thrives on the absence of healthy confrontation with other sources of information that could effectively challenge prejudices and generate constructive dialogue; instead, it risks turning people into unwilling accomplices in spreading biased and baseless ideas.  The tragedy of disinformation is that it discredits others, presenting them as enemies, to the point of demonizing them and fomenting conflict.  Fake news is a sign of intolerant and hypersensitive attitudes, and leads only to the spread of arrogance and hatred.  That is the end result of untruth.” 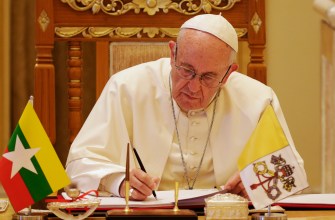 While lauding educational efforts to help people identify disinformation, and the drafting of new regulations to combat it, the Pope has praise for “the work being done by tech and media companies in coming up with new criteria for verifying the personal identities concealed behind millions of digital profiles.”

Pope Francis, then, proposes a “journalism of peace”: “By that, I do not mean the saccharine kind of journalism that refuses to acknowledge the existence of serious problems or smacks of sentimentalism.  On the contrary, I mean a journalism that is truthful and opposed to falsehoods, rhetorical slogans, and sensational headlines.”

The message closes with a poetic — and genuinely useful — checklist of behaviors that can help any of us stop fake news in its tracks, regardless of our religious beliefs or non-beliefs:

Social media distorts the reality of the public sphere.
Up Next
Technology & Innovation

A new survey indicates that large financial institutions are relaxing restrictions around mobile trading, increasing the volume of deals done via mobile apps 31% in 2017 from the year before.