As of 2019, American borrowers owe $1.5 trillion in student debt loans. A total of 44.7 million citizens, over 13 percent of the population, are struggling to pay college and postgraduate loans, making student debt forgiveness a leading Democratic issue in the 2020 presidential race. They’re not the only students feeling this pain. In Rhode Island, one school district has resorted to a form of public shaming to try to collect. In this case, it is grade school kids who pay the price.

“In accordance with Warwick School Committee Policy EFB; Effective Monday, May 13, 2019, if money is owed on a paid, free, or reduced lunch account a sun butter and jelly sandwich will be given as the lunch choice until the balance owed is paid in full or a payment plan is set up through the food service office.”

In a response post — the initial post made national headlines, prompting further explanation — the district claims its outstanding lunch debt is $77,000, with 78 percent of the debt coming from students not enrolled in the district’s Free and Reduced Lunch Program.

This story, it should be noted, has a happy ending — for now. The media attention made its way to Chobani founder Hamdi Ulukaya, who paid off the bulk of the debt himself. A GoFundMe page has also raised over $57,000, with much of that money coming in over the last week.

The path to debt liquidation is suspect. In January, a local businesswoman attempted to donate $4,000 to help pay it off; she had set up donation jars at two area diners. Administrators balked, claiming it wouldn’t be fair to pay off the debt of some students and not others. The district also claimed that some parents would be upset if their child’s lunch was being paid for.

This story is layered, however. The district can’t take all the blame. Last year, Rhode Island announced that it was $346,000 in debt due to unpaid school lunches. At least in Warwick, the predominant amount of this debt came from families not enrolled in financial assistance. Of course, we don’t know every family’s situation, but some amount of parental negligence adds fuel to this fire.

The district with the most outstanding debt is Providence, which also has the distinction of being third on the list of cities with the greatest income inequity. The problem is so bad that in 2017, officials installed “giving meters” around the city to curb panhandling. This fact highlights the root of the problem, well beyond the bill for a slice of pizza.

Elementary and high schools across the nation are struggling to pay bills. Seventy-six percent of school districts in America currently have school lunch debt. One district reportedly has a $4.7 million debt. Under current federal guidelines, a family of four earning less than $31,400 is eligible for free lunch, while those families earning roughly $45,000 benefit from reduced lunch fees. As of 2016, 20 million students in America were receiving free lunches. 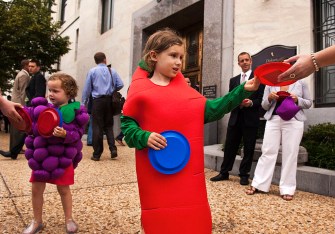 While educational institutions need to not only survive but thrive, the responses by schools, such as cutting off lunches for children or, in the case of Warwick, threatening to take away hot meals, is not an answer. Making students who don’t pay their lunch bill wear wristbands is the most egregious policy imaginable. Or maybe the most egregious is an Alabama school stamping a smiley face with the plea, “I need lunch money” on the student’s arm.

Grade school is hard enough without being singled out because of your family’s financial troubles. If this at all seems like a global issue, it’s not. Many other countries know how to properly educate and feed students. As research shows, America has been lagging behind in education rankings for years.

Lunch debt is a symptom of the growing problem of education budget cuts. In 2015, a total of 29 states provided less funding for school districts than in 2008. Teacher strikes are becoming a regular occurrence. In January, over a half-million students in Los Angeles were affected by a week-long strike, which fortunately ended in the teachers’ favor. Not all districts are so fortunate.

That educators need to strike at all is indicative of the many problems schools are facing: shrinking arts and physical education budgets, teachers forced to buy student supplies, an incessant focus on charter schools, and, of course, the recent college admissions scandal. The national political focus is trained on left versus right, but the real struggle is income equality that favors the wealthiest, who believe they can purchase favors at the expense of everyone else.

With the money donated in Warwick, students should be covered for a few years. Most districts won’t receive this much attention. Until income inequality is properly addressed, through legislation and regulations, sun butter and jelly it is for students around the nation, who show up to be educated and instead are handed a lesson in the consequences of unfettered capitalism.

Symbolic gestures often speak to our psyche in ways no rational action could ever speak to our intellect.
Up Next
Health

His biological clock is ticking, too

Men should be just concerned as women.