“Which of the following people would you say is the most admirable: Mother Teresa, Bill Gates, or Norman Borlaug?” asks psychologist Steven Pinker in his article “The Moral Instinct.”

Most people answer Mother Teresa. She won of the Nobel Peace Prize, was canonized by the Catholic Church, and raised millions of dollars to run her missions for the poor. Bill Gates is best known for being a billionaire who earned his riches through selfish, Scroogian capitalism. And Norman Borlaug is… the answer to a daunting trivia question?

Not so fast, writes Pinker. Mother Teresa enjoyed good moral PR, but her million-dollar missions substituted modern medical procedures and palliative care for prayer and “extoll[ing] the virtues of suffering.” Meanwhile, Bill Gates co-founded the Bill and Melinda Gates Foundation, a charity that has saved or improved the lives of more than 100 million people by developing strategies to fight poor health and infectious diseases in the world’s poorest communities.

As for Norman Borlaug, he potentially saved more lives than any other person in history (more on him later).

Pinker’s question reminds us that while we benefit immensely from science, our admiration for its practitioners is disproportionate to the progress they’ve made possible. In the spirit of Thanksgiving, we’ve chosen to highlight seven scientists whose accomplishments made our pale blue dot a better place to be, and for whom we are immensely grateful. 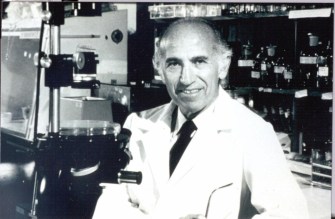 Polio is a debilitating, infectious disease that destroys nerve cells in the brain and spinal cord. It can paralyze parts of the body, and should it strike the muscles used for breathing, the result is a drawn-out death. If the symptoms alone weren’t heartbreaking enough, the disease is predominately contracted by children.

But polio may one day be little more than a footnote in history thanks to virologist Jonas Salk.

Salk developed one of the first polio vaccines while working as the head of the Virus Research Lab at the University of Pittsburgh. To prove its efficacy, he tested the vaccine on volunteers, including himself. It worked, yet despite creating a modern miracle, Salk refused to patent or monetize it. “There is no patent. Could you patent the sun?” he said during a famous TV broadcast.

Soon after, Albert Sabin introduced an improved vaccine that could be administered orally and protected the digestive tract to prevent the spread of the disease more efficiently.

Their vaccines came at the perfect time. The United States endured devastating epidemics of polio throughout the first half of the 20th century. The year 1952, three years before Salk released his vaccine, saw a frightening increase in the disease’s prevalence, with 57,879 cases and 3,145 deaths.

Shout outs are also due to John Franklin Enders, Thomas Huckle Weller, and Fredrick Chapman Robbins, whose work cultivating the poliomyelitis virus launched Salk’s research. And no discussion of vaccination would be complete without mention of Edward Jenner, the founder of vaccinology, who inoculated an 8-year-old boy against smallpox in 1796, another virulent disease the world is better without. 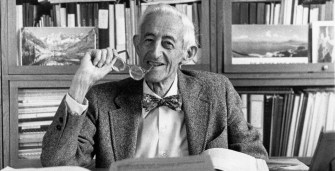 Abel Wolman, along with Linn Enslow, developed a formula to use chlorine to sanitize water. Image source: John Hopkins University

For much of human history, access to potable water proved a major hurdle to our survival. Diseases such as cholera, dysentery, and typhoid spread through water contaminated by practices like open defecation and poor waste management. Until the development of germ theory, civilizations were at a loss for a reliable explanation as to how these diseases spread, and cases like the Flint Water Crisis remind us how many of us take access to safe water for guaranteed.

If you’re one of the millions of people with safe drinking water spilling from your tap, you have Abel Wolman to thank. He designed procedures for water sewage chlorination and disinfection, and alongside chemist Linn Enslow, developed a formula to use chlorine to make water sanitary, while still allowing for safe absorption of the dangerous chemical.

Since their pioneering work, millions of people worldwide have gained access to safe drinking water. In 1990, 1.26 billion people did not have access to an improved water source. By 2015, that number had fallen to 671 million with most regions seeing massive improvements. Only Sub-Saharan Africa has seen an increase of people without access.

The United Nations has made clean water and sanitation one of its Sustainable Development Goals. By 2030, the UN hopes to “achieve universal and equitable access to safe and affordable drinking water for all” as well as “access to adequate and equitable sanitation and hygiene for all” (Oh, and to end open defecation).

Not 50 years ago, such goals would have been considered a pipe dream. But thanks to Wolman and Enslow, this dream is now literally being piped to people the world over.

When King Charles II of England had an apoplectic fit, his doctors, the best in all the land, immediately began bleeding him — alongside a regimen of enemas, blisterings, cathartics, scarification, cupping therapy, and sacred tinctures. He died soon afterward, leading many modern observers to quip that he perished of too much healthcare.

Thanks to William Harvey, who discovered blood circulation in 1628, we learned the body wanted its blood left in. Yet, medical procedures remained dangerous. If a patient lost a lot of blood from injury or surgery, doctors could perform a blood transfusion, but the technique was a dice roll. Some patients recovered, while others mysteriously died.

Enter Austrian physician Karl Landsteiner, the discoverer of blood types. Expanding on the work of Leonard Landois, Landsteiner classified the A, B, AB, and O blood groups and showed that the transfusion from group A to group B (and vice versa) resulted in the destruction of new blood cells by antibodies. In 1930, he won the Nobel Prize in Physiology or Medicine for his work.

Modern medicine would not be possible without Landsteiner’s discovery. Knowing a person’s blood type is a common part of everyday procedures, such as heart surgeries, trauma care, and treatments for diseases like anemia and hemophilia. Five million Americans need blood transfusions every year. There’s a good chance someone at your Thanksgiving dinner could only RSVP because of Landsteiner’s work. 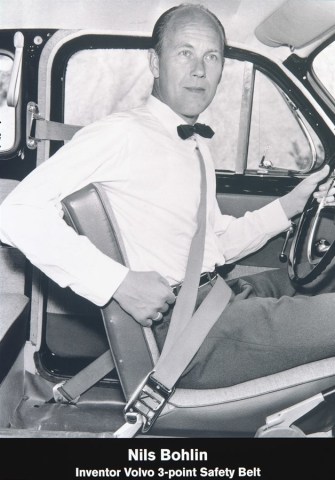 When cars first hit the roads, they were a public menace. In 1925 the U.S. annual death rate was 18 people per 100 million vehicle miles traveled. By 1997 that number dropped to 1.7 per 100 million vehicle miles traveled. That’s a 90 percent decrease despite six times as many people driving, an 11-fold increase of vehicles, and 10 times more miles driven.

This reduction isn’t because we’ve became better drivers. In fact, the number of accidents reported with material damage has trended only upwards. As Hannah Ritchie and Max Roser note, it is the “safety standards of and within cars” as well as “interventions such as speed limits” that have decreased the risk of death.

While many engineers and city planners deserve thanks for the lives they’ve saved, we’re giving this one to Nils Bohlin.

Before Bohlin, cars were only equipped with two-point seatbelts (aka the lap belt). During an accident, a lap belt restrains the lower half but not the upper half, so velocity causes the passenger’s body to jackknife. This can lead to head, spine, and intra-abdominal injury. It’s stomach-churning to watch in slow motion.

Bohlin developed the three-point seat belt (aka the shoulder-lap belt) while working as Volvo’s first chief safety engineer. Introduced in Volvo cars in 1959, Bohlin’s invention not only saved lives but prevented innumerable life-altering injuries. While the U.S. Patent Office issued a patent to Bohlin, he and Volvo offered the design for free to other car manufacturers in the interest of the common good.

Today, seat belts reduce crash-related injuries and deaths by about half. 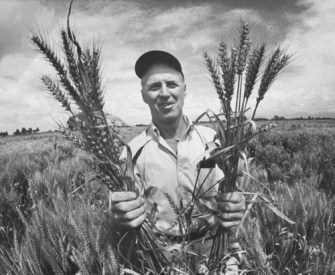 And now we get to Norman Borlaug. Borlaug was an agronomist who worked for the International Maize and Wheat Improvement Center as the director of its International Wheat Improvement Program. Starting in the 1940s, he began working with Mexico on its wheat cultivation problems, developing new wheat strains that resisted diseases, produced high yields, and could adapted to challenging growing conditions.

His work proved monumentally successful and would later be used to transform crop management in Asia, Africa, the Middle East, and Latin America, too. It also set Borlaug on the humanitarian path to feed the world, for which he was awarded the Nobel Peace Prize in 1970.

This improved cultivation sparked the Green Revolution and increased crop yields across the world. Since the 1960s, yields per hectare have increased substantially. For example, in 1961 Mexico produced 1.68 tonnes of wheat per hectare; by 2014 it was producing 5.19 tonnes. In the same period, China went from cultivating 2.08 tonnes of rice per hectare to 6.81 tonnes.

But there’s still much work to do. One in nine people in the world are undernourished, and poor nutrition kills 3.1 million children under five per year. Those lucky enough to survive such harsh conditions still suffer from stunted mental and physical development.

The United Nations has made zero hunger one of its Sustainable Development Goals, looking to end hunger and ensure worldwide access to safe and nutritious food by 2030. Like potable water, this goal may prove too industrious, but the only reason we can even strive for it is because of the work of people like Norman Borlaug.

Plenty of thanks to go around

The selection process for a listicle of this nature will, of course, have some arbitrariness. In this case, it was based on a tight deadline and information readily at hand. The truth is that there are simply too many scientists whose work has improved our world to give due thanks in a single article.

Louis Pasteur and Robert Koch put us on the path to modern germ theory. Rachel Carson’s writings prompted a nationwide ban on DDT. Fritz Haber and Carl Bosch developed a process to create synthetic fertilizers. Richard Lewisohn found a way to store blood for later use. Jennifer Doudna’s CRISPR is already showing promise to eradicate many genetic diseases. The list goes on.

Then there are the scientists and engineers whose work provided an incremental step toward a larger revelation. As we saw, Jonas Salk’s polio vaccine could never have existed without the preceding work of Jenner, Enders, Weller, and Robbins. And Bohlin’s seat belt is only one feature that improves safety in modern cars. A myriad of unnamed engineers helped to develop airbags, the anti-lock brakes, power steering, backup cameras, and better frames — all of which make modern cars safer than the mechanized coffins of our great-grandfathers.

Any of these people, and many more, are well deserving of praise, admiration, and thanks this Thanksgiving.

A vertical map might better represent a world dominated by China and determined by shipping routes across the iceless Arctic.
The Future

Synthetic milk is not a sci-fi fantasy; it already exists.
High Culture

Climate activists’ brand of iconoclasm is far removed from the Beeldenstorm that swept medieval Europe.
Up Next
Hard Science

New research identifies an unexpected source for some of earth’s water.