The Great Pacific Garbage Patch is a vortex of trash located between America’s West Coast and Japan. In fact, it’s not only one patch—there’s a western patch closer to Japan and an eastern patch bobbing around southern California. While the surface debris is bad enough, it turns out that 70 percent of the garbage sinks to the ocean’s bottom.

Waterways are not the only places we dump trash. While environmentalists finally forced change on Staten Island’s Fresh Kills Landfill, the world’s largest garbage dump was the subject of notoriety for being visible from space. Speaking of space, humans have also left plenty of trash floating in the ether. As of 2019, an estimated 129 million pieces of space debris orbit our atmosphere.

While most of the debris is tiny, roughly 34,000 objects measure over 10 centimeters in length. This includes dead spacecraft like the U.S. ship Vanguard I which first launched in 1958, and a camera lost by American astronaut Ed White on the first-ever space-walk. While most debris will incinerate upon entering Earth’s atmosphere, many problems exist due to all that trash, such as interfering with newer missions. 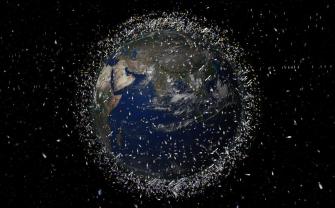 Artist’s impression of the terrestrial suburbs, with its satellites and debrisCredit: ESA

“Out of sight, out of mind” is not an appropriate mantra if we want to continue space exploration. Last week, the European Space Agency (ESA) took the proactive step of finalizing a contract to begin space clean-up. Beginning in 2025, the ClearSpace-1 mission will remove a washing machine-sized piece of junk—a payload adapter—with a four-armed claw spacecraft. After plucking it from space, the claw will force it downward until incinerated.

Over 23,000 objects have been discarded in 5,500 launches over the last 60 years. Space junk can float around for thousands of years. This is not a benign occurrence. In 2009, a communications satellite collided with a dead Russian military satellite, resulting in thousands of pieces of new debris.

Cleaning up small junk is quite difficult—there’s nothing akin to a pool skimmer in space yet—so ClearSpace, the company behind this project, will begin by grabbing a 112-kilogram payload adapter that was originally launched in 2013. The team is using a claw due to its mechanical flexibility; they tried a net as well, but given that you have to get it right on the first attempt, they wanted a bit of breathing room.

The ESA signed a $105 million contract with ClearSpace for this project. ClearSpace CEO Luc Piguet says there’s a lot of work in outer space:

“The way space has been used until now has led to a situation where over 5,000 satellites and out-of-control rocket stages are in orbit compared to only 2,700 working satellites. In-orbit services are not only a natural part of future space operations, they will also ensure the development of a thriving space economy.”

ClearSpace isn’t the only company leaving Earth’s atmosphere. In October, the Japanese company, Astroscale, announced that it raised $191 million to clean up space debris. This is part of a broader movement by the U.K. Space Agency, which has awarded seven companies with £1m to clean up space. Graham Turnock, chief executive of the agency, says space will become an economic powerhouse in the coming years.

“People probably do not realise just how cluttered space is. You would never let a car drive down a motorway full of broken glass and wreckages, and yet this is what satellites and the space station have to navigate every day in their orbital lanes… This funding will help us grasp this opportunity and in doing so create sought after expertise and new high skill jobs across the country.”

Don’t wait until Christmas to gift a telescope this year.All throughout the year, two bright lights have stood out in the post-sunset skies.Earlier this year, on March 31, 2020, Jupiter and […]