There’s something unique about the logging industry in Myanmar. After a logger fells, say, one of the country’s numerous and valuable teak trees, the log is hauled by a captive elephant. Wrapped in harnesses, owned by the state or private contractors, these elephants are forced to engage in difficult labor under the guidance of mahouts—elephant keepers, often referred to as “oozies” in Myanmar—who ride astride the animal’s neck.

Sounds cruel, right? Well, yes and no. Elephants throughout history have had more than their fair share of bad treatment at the hands of human beings. They’ve been used in wars, compelled to perform tricks in circuses through the use of hooks and whips, and they are “broken” so that they’ll allow humans to ride them in Thailand and other countries. Even in zoos, elephants are confined to spaces significantly smaller than their home range in the wild, which can be as large as 580 square miles.

But Myanmar’s logging elephants seem to be treated more humanely. As just one example, Asian elephants used for logging in Myanmar live for 42 years, a little more than twice as long as Asian elephants kept in zoos live. 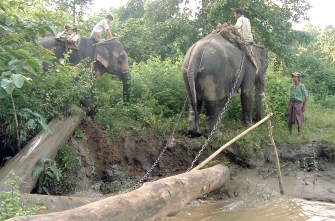 It seems counterintuitive that elephants employed in hard labor would live longer than zoo elephants who, while not free, aren’t compelled to work particularly hard. There are a few reasons for this. First, Myanmar’s logging elephants aren’t exactly captives—a better term might be semi-captive. At the end of each workday, the elephants are allowed to roam free through the jungle to forage, hang out with their wild elephant friends, and, if they’re in the mood, mate. In the morning, the mahouts find their elephants to round them up for the next day of work.

Thanks to government regulations, the working elephants are given plenty of free time. The elephant labor code limits them to working for eight hours a day, five days a week. They even get summer vacation, where they go to “rest camps” to wait out the hot season. The elephants are also treated to mandatory maternity leave and given medical care. Writing from America where the average worker puts in 47 hours of work per week and spends $9,403 per year on healthcare, my fingers are crossed that I’ll be reincarnated as a Myanmar elephant (possibly after I die from not being able to afford some life-saving procedure).

In fact, when the Myanmar government restricted timber exports to preserve their shrinking forests, the unemployed elephants suffered. State-owned elephants continued to work, but those owned by private contractors, some 2,500, were out of work. Reportedly, these elephants got fat and became easily irate. Worse still, some private elephant owners chose to sell their elephants to Thailand, where tourists pay good money to go on elephant rides and where the elephants are treated significantly worse.

But is it better than life in the wild?

However, not all is rosy in the life of a logging elephant in Myanmar. For instance, elephants who are caught in the wild to work as loggers live significantly shorter lives than those bred in captivity—specifically, wild-caught elephants die seven years earlier than captive-bred elephants. Researchers speculate this is due to the stress of capture techniques, such as lassoing elephants, sedating them, or driving groups up against pre-made barriers; the trauma of separating the highly social animals from their herds; or subjecting older elephants to the taming process. All elephants employed in the Myanmar logging industry are branded as well. Furthermore, they are ridden regularly by mahouts; elephants are not meant to be ridden, as this can lead to spinal injuries. And in a final insult, logging elephants are used to clear the forest environments that they would have roamed free in were they not captives.

Still, it has to be acknowledged that Myanmar’s logging elephants are treated significantly better than captive elephants in other parts of the world. This raises perhaps the quintessential issue in conservation: Is it better to keep animals in captivity, or is it better to subject wild animals to humanity’s destruction of their habitat and poaching? Only 20% of elephants’ range is protected globally, with the rest up for grabs for development and human settlement, and some estimates claim that up to 55 African elephants are poached on a daily basis. Of course, humans could always learn to live within their means and share the planet with their co-habitants as well, but this idyllic outcome seems unlikely.

Experts say we should only be working 15 hours per week, so why are some working 80?
▸
6 min
—
with
James Suzman
Videos

A 2020 study has revived a longstanding controversy over Christopher Columbus’ claims of marauding cannibals in the Caribbean.
Up Next
Career Development

Are you truly confident? 9 important lessons for women at work.

March is Women’s History Month, and Big Think+ is commemorating it with a collection of videos highlighting both women’s history, and the complicated choices facing women who are making history […]