A new study has bad news for people who want to make basic income a reality in the United States.

According to a survey by Echelon Insights of 1,006 people in late June, support for a basic income program is divided by demographic lines, with support highest among lower-income brackets and minimal in the higher income brackets. Among those making more than $125,000 a year, 61 percent of respondents either “somewhat opposed” or “strongly opposed” the idea of giving a thousand dollars of cash to Americans en masse. 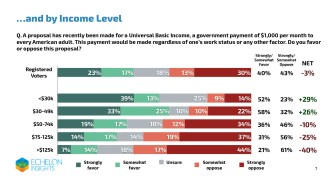 ​An example breakdown of the survey data. Notice the question phrasing at the top. Similar results were found for age and political affiliation.

What else did the study say?

The study — it probed an initiative similar to Andrew Yang’s “Freedom Dividend” plan to give everybody $1,000 a month — found that income wasn’t the only fault line, support for the UBI concept also split along ideological lines and age group.

Two-thirds of Republicans (67 percent) oppose the idea while only about a quarter (26 percent) of Democrats do. Age was also a significant factor, with a majority of people below the age of 39 supporting the idea and majorities above that point starting to oppose it. While the middle-aged were split, support among those aged 65 and over was a mere 19 percent.

Putting all this data together, it turns out that old, rich Republicans are opposed to new government programs based around giving people money.

Although, it is important to remember that there are plenty of well-thought out objections to basic income as a concept, despite its long list of prestigious supporters. Some oppose, for instance, the idea of giving people cash in fear those individuals will “waste” the funds. They instead support more targeted means of assistance, such as food stamps. Others are concerned about the cost itself — they aren’t convinced that Yang has a feasible plan to pay for it.

Universal basic income: The plan to give $12,000 to every American adult

What does this mean for basic income in the United States?

First and foremost, it means that the “Freedom Dividend” isn’t as popular as Yang and his supporters think it is.

Andrew Yang has argued that he thinks he will be able to get a majority in Congress, even a Republican one, to support basic income as it would be politically impossible for Congress to vote against giving free cash to the people in their district.

“For the Republicans, they’ll be like, ‘Wait a minute. Do I really want to sabotage the Dividend that will help my constituents in rural areas and areas that have been devastated by automation?’ Imagine their offices back home and phone lines. Cash is a hard thing to demonize. It’s tough for Mitch McConnell to argue, ‘The money will hurt you,’ Yang said in a Reddit Ask Me Anything.

History, however, indicates that they are more than willing to do that with plenty of other things, such as Social Security, which gives cash to people.

Basic income is an increasingly popular idea for cutting down on bureaucracy, ending poverty, and making the world a little better. However, many people are still skeptical of the idea. If the results of this survey are accurate, you can rule out getting a check for $1,000 a month any time soon.

Why the effects of aging are detrimental to being the U.S. president.