For many people around the world, the holiday season is a time to eat, drink and be merry with family and friends. But between unwanted gifts, energy use and all the travel, the celebrations can create problems for the planet.

Here are four things you can do to make your holiday festivities more sustainable.

Here’s some good news for those who prefer real Christmas trees. Because they’re grown on farms, buying a real tree for your house doesn’t harm forests, according to the Rainforest Alliance.

Even though they are cut before reaching maturity, the Alliance says they are just as effective at trapping CO2 as any other tree variety. Artificial trees, one the other hand, are mostly made of plastic that has been shipped long distances.

Don’t want to cut down a tree? Brits can now rent a living tree just for the Christmas period. The pot-grown trees are returned to the farm in January to continue to grow for the following year.

The environmental impact of the festive season in the developed world is huge. Christmas lights in the United States use more electricity than El Salvador does in a year.

Switching to LED lights can make a big difference in terms of energy consumption and carbon footprints. In fact, LED lights use around 25% of the energy of conventional incandescent bulbs. 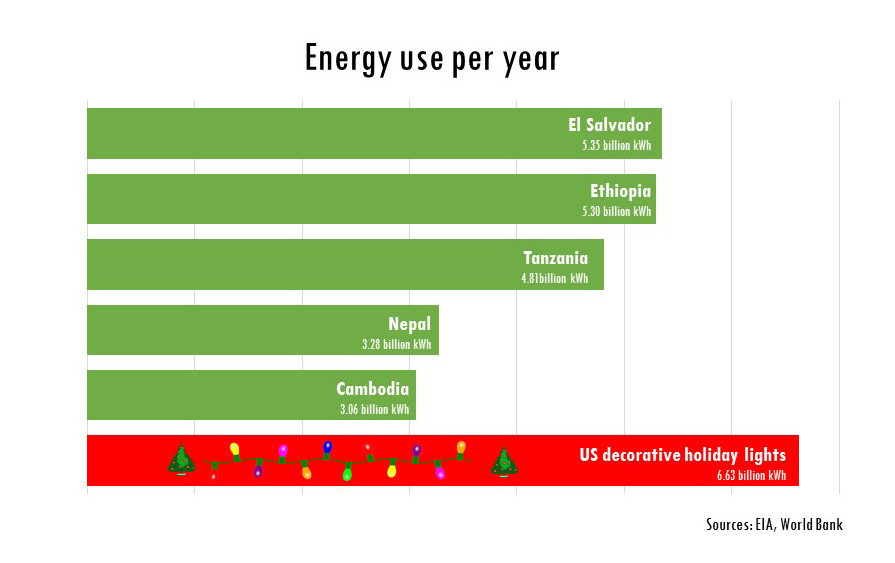 Decorative holiday lights in the United States burn up more energy than El Salvador in a year. Image: Centre for Global Development.

According to a survey by US consumer website Finder, more than 60% of Americans expect to get an unwanted gift this year. That’s 154 million people receiving presents worth a total of over $15 billion, half of which will be re-gifted or taken back to the store.

As the cost of Christmas rises each year, a survey by UK mortgage lender Nationwide found the average family will spend more than $950 on Christmas 2019, almost twice the average UK weekly wage.

One solution could be to reduce the amount of gifts you give and donate to a charity instead. The UK’s Charities Aid Foundation says 4 out of 10 people would willingly forego a present if the money was given to charity instead.

In North America, Christmas traditionally brings airport chaos as people travel to spend the season with family and friends. Last year, a record 25 million people flew for the Thanksgiving holiday in the United States.

The obvious way to avoid CO2 emissions is to not travel at all. But that can be tricky, especially around this time of year. So, when possible, consider taking the train or travelling by car instead. Carbon emissions per passenger for each kilometre travelled are around 285 g for air travel, 158 g on the road, and 14 g for rail, according to European Environment Agency figures.

The IATA says air travel emissions per passenger are decreasing. And if you do choose to fly, the International Council on Clean Transportation recommends flying in economy, where more seats mean less CO2 per passenger, or flying direct or on newer, regular-sized planes, which use less fuel.

Tags
climate changeconsumerismenvironmentfamilysustainabilitytravel
In this article
climate changeconsumerismenvironmentfamilysustainabilitytravel
Related
Strange Maps
In 1882, a man wrongly drew a map. His mistake saved a forest of 300-year-old trees.
A 19th-century surveying mistake kept lumberjacks away from what is now Minnesota’s largest patch of old-growth trees.
Life
Synchrony with chaos: Mathematics predicts blinking lights of a firefly swarm
A researcher explains a little-known niche within modern physics: animal collective behavior.
Hard Science
Earth can regulate its own temperature over millennia, new study finds
It’s on a 100,000-year timescale, though, so the next few centuries might not be so comfortable.
Life
Invasive plants are coming to a neighborhood near you
We want to fight invasive species. But to wage a war, you have to know who your enemy is.
High Culture
Japan’s “waste not, want not” philosophy, from meditation to Marie Kondo
“Oosouji” or “big cleaning” is much more than a chance to tidy up.
Up Next
High Culture
What the third Star Wars trilogy was supposed to be about
Spoiler: Microbiomes in space!