A well-circulated meme features a depiction of the Buddha with the quotation marks around “I didn’t say that.” There have been many false attributions to this Indian sage over the years. In some ways, this makes sense: he was a practical thinker who taught timeless wisdom during his discourses. While behind the scenes he was as much politician as philosopher, he did his best to offer instruction in a manner that everyone could understand.

Taoism is a different animal. Unlike its contemporary counterpart, Confucianism, Taoism eschewed rigid orders by expressing more flexibility and color. An extreme emphasis on “naturalness” pervades many texts, which are intentionally ambiguous. The “Way” is, in essence, many ways. It reminds us that every response is dependent upon the circumstances. That’s made it much harder to pin down in a culture like America, where polarization is the norm.

There is much knowledge to be gained by reading these amazing texts. In one sense, Taoism is more akin to Hinduism. It’s not one particular system, but many schools falling under an umbrella term. Below I chose eight statements that are applicable in the age of COVID-19. They’re like mirrors reflecting back how we’re reacting to our circumstances. The first four are classical Taoism, while the latter four are modern interpretations.

The Dao of Letting Go (or Not Trying)

The Dao of Letting Go (or Not Trying)

“The Scripture of the Way and Its Virtue,” popularly know as “Tao Te Ching,” is one of the two foundational texts of Taoism. Written by Laozi (Lao Tzu), an older contemporary of Confucius, this collection of aphorisms features a wide range of techniques for self-cultivation as well as thoughts on government—the two were not necessarily separate. This book has been heavily influential in our culture. Ronald Reagan quoted from it during one well-known speech. Meanwhile, “The Matrix” and “The Tao of Pooh” used Taoism as a basis for new artwork. I’ve always loved the above passage as it reminds us of that long-held view: the more we crave, be it status or money, the more we suffer. That seems especially pertinent during this pandemic, where the focus is on healing and loved ones, not consumerism.

“Anything that smacks of exaggeration is irresponsible. Where there is irresponsibility, no one will trust what is said, and when that happens, the man who is transmitting the words will be in danger. Therefore the aphorism says, ‘Transmit the established facts; do not transmit words of exaggeration.’ If you do that, you will probably come out all right.” — “The Book of Master Zhuang“

Popularly known as Zhuangzi, this passage is from the other foundational text of Taoism. Whereas Laozi was known as a serious cat (his name means “Old Master”), Zhuangzi was a trickster. His stories are more wide-ranging and humorous, though still pointed. I posted this quote on social media before publishing this article. Someone immediately replied that it could have been written today, not in the 4th century BCE. We’re not as advanced as we think. We certainly still need instruction.

“What we mean by strength of deeds is / responding with alacrity when encountering alterations; / pushing away disasters and warding off difficulties; / being so strong that there is nothing unvanquished; / facing enemies, there are none that are not humiliated; / responding to transformations by gauging the proper moment; / and being harmed by nothing.” — “Master of Huainan“

This collection of scholarly debates was presented to the King of Huainan, Liu An, in 139 BCE. As with many texts influenced by Taoism and Confucianism (with some Mohist philosophy thrown in), these sentiments require that the seeker remain flexible, as different circumstances require nuanced responses. I was particularly struck by “gauging the proper moment.” As I’ve written previously, too many people are doubling down on their biases and ignorance right now instead of treating this pandemic head on.

“The Way has no fixed position; / It abides within the excellent mind. / When the mind is tranquil and the vital breath is regular, / The Way can thereby be halted. / That Way is not distant from us; / When people attain if they are sustained. / That Way is not separated from us; / When people accord with it they are harmonious.” — “Inward Training“

If you’re wondering where the Mandalorians came up with their saying, “This is the way,” look no further than Taoism. Mando realizing he must rebel against the prescriptive course in order to ensure order (by saving The Child, aka Baby Yoda) is his recognition that there is no “fixed position.” Everything is contextual, as this passage from a 4th century BCE collection of self-cultivation practices reminds us. 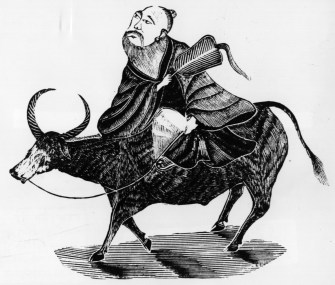 “Change is not something that is carried out abruptly and irrationally. It has its fixed course in which the trends of events develop. Just as we confidently count on the sun rising tomorrow and on spring following winter, so we can be sure that the process of becoming is not chaotic but pursues fixed courses.” — Helmut & Richard Welhelm, “Understanding the I Ching“

The “I Ching,” or “Book of Changes,” is an incredible system that reminds us everything can become its opposite. Yet, as with COVID-19, these changes are not abrupt. They only feel abrupt because we weren’t prepared. As I wrote about last month, we were warned about the potential for a coronavirus pandemic starting in a Chinese wet market in 2007. Change is inevitable, but we can see it coming, if we know where to look.

“Is a long life such a good thing if it is lived in daily dread of death or in constant search for satisfaction in a tomorrow which never comes?” — Alan Watts & Al Chung-liang Huang, “Tao: The Watercourse Way”

Alan Watts was the foremost translator of Taoist and Buddhist thought in the fifties and sixties. This wonderful collaboration with Al Huang is one the first serious inquires into Taoism in the West. As with the foundational texts, they provide a bit of humor alongside insights. Watts once said the problem with the God of the West is that he takes himself too seriously, whereas the gods of the East are playful and dynamic. Be here now, as it goes.

“The main problem with this great obsession for saving time is very simple: you can’t save time. You can only spend it. But you can spend it wisely or foolishly.” — Benjamin Hoff, “The Tao of Pooh“

Sure, Hoff’s feel-good classic is Tao-ish, but I’m pretty sure Laozi would nod his head in agreement with this timeless piece of wisdom. Right now, using your time wisely implies doing your duty in trying to protect our fragile health care system and those most susceptible to disease. To use it foolishly—well, log onto social media. It’s rather easy to spot.

Who better to sum up the essence of Taoism than one of hip-hop’s great masterminds? Three qualities that would make this entire pandemic at least a little bit easier to manage. Nothing is easy right now, yet we don’t have to suffer as much as we are when proper leadership arises. Right now, we have to be those leaders.

A group of prominent scientists shares how research has changed them.
Strange Maps

“My dad asked me if I had been to tutoring and I lied… Then he showed me the tablet.”
Up Next
Strange Maps