The term “food desert” signifies areas with limited access and resources to healthy food. In general, they are low-income areas located at least one mile away from a grocery store in urban areas and 10 miles in rural regions. These neighborhoods tend to be dominated by fast-food chains, gas stations, and bodegas; processed foodstuffs comprise the majority of available nutrition. According to the USDA, these regions lack “fresh fruit, vegetables, and other healthful food products.”

Traditionally, small populations live in actual deserts. Food deserts, however, include 23.5 million Americans, nearly 14 percent of the populace. While the term “desert” was first applied to regions lacking basic amenities in 1973, “food desert” came into usage in the U.K. in 1995. These regions, unsurprisingly, are more susceptible to obesity and other health problems than populations that live close to Whole Foods.

In 2012, actor Wendell Pierce co-founded Sterling Farms in his New Orleans neighborhood specifically to combat food deserts. Watching his city struggle after Hurricane Katrina caused him to consider solutions for his neighbors. It was a heroic effort sorely needed; expansion plans were imminent. Sadly, the store closed after just one year, apparently due to poor execution.

There may be a solution closer to home, however. A recent 2018 study, published in International Journal of Environmental Research and Public Health, claims that food deserts — at least the few studied in Las Vegas — already have at least one solution: dollar discount stores.

Hacking hunger: How to survive in a food desert

Hacking hunger: How to survive in a food desert

While this is not where you’d expect to pick up produce, it turns out that on markers of healthiness and expense, such stores match their bigger (though farther away) rivals. The research team, led by Courtney Coughenour at the School of Community Health Sciences at the University of Nevada, found that dollar stores match competitors in produce quality and beat them in price while scoring lower on availability.

Though not a cure-all by any means, they continue:

For this study, the team identified every grocery store in the Las Vegas metropolitan area, breaking them up into national or regional chains offering a broad selection of foods. They then chose one-quarter of that sample based on geography, resulting in 40 stores. They split up these stores equally based on income quintiles. Using the same method, they picked out 14 dollar discount stores to include in their study. 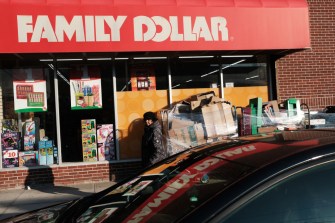 A woman walks by a Family Dollar store on December 11, 2018 in the Brooklyn borough of New York City. Photo credit: by Spencer Platt / Getty Images

As mentioned, in terms of availability, grocery stores win out. Overall, chains have a bigger selection, while certain foods, such as pears and low-fat ground beef, could not be found at any dollar location. Over half of all discount stories carried no ground beef at all.

Yet when quality was factored in, there was no statistical difference. When it comes to regular food items, grocery stores and discount stores offered similar prices, with dollar stores edging out chains. When it came to the healthiest food options, grocery stores offered better prices. Still, that was only at the extremes, as discount stores priced 84.2 percent of produce and 89.5 percent of non-produce items at “significantly less expensive” prices. As the team concludes,

Chalk it up to channel blurring, which is when a store sells unexpected items — a pharmacy offering produce, for example. Or a dollar discount store. Because these are often in communities with Supplemental Nutrition Assistance Program (SNAP) funds, letting local residents know they can find healthier food options at such outlets is one means for tackling the food desert issue.

Of course, this is not the only change needed in our food infrastructure. Though Sterling Farms might have vanished, better grocery options in low-income neighborhoods are needed. Until changes are made, we have to work with the system in place, which sometimes requires a mindset shift, or, as the research team notes, blurring the channels.

There are two kinds of suffering. One is pure pain. The other makes life worth living.
▸
6 min
—
with
Paul Bloom
Up Next
Starts With A Bang

What Was It Like When Our Solar System First Formed?

What happened 4.56 billion years ago is the most important part of the cosmic story ever to happen to us.If you were to look at our Universe at the time our […]