Brutality and warfare have followed humankind wherever we have gone. Throughout the years there have been epic battles between people that have been carved into Neolithic caves and immortalized in the Homeric Hymns. If we were naive enough, we might actually believe that this was the only mode of human existence and interaction.

By looking at the historical clashes of nations we can learn how the ancients overcame adversity through warfare and early types of diplomacy. Studying the choices of ancient nations can also prompt us to ask whether these solutions are still relevant to us today. Everyone now faces a new enemy worldwide that we must face together: ourselves. In a globalized and interconnected cultural ecosystem such as ours, we are required to come up with solutions for the common good of the world.

Through diplomatic and humanitarian efforts we can enter into a new world stage where peace and prosperity are the norm and diplomacy is the ultimate goal of those in power.

Revisiting the Thucydides Trap with China

Harvard Professor and political scientist Graham T. Allison has weighed the historical theory told originally by the ancient Greek historian Thucydides and put it into perspective with current U.S.-Chinese relations. In History of the Peloponnesian War (431–404 BC), Thucydides writes:

“War began when the Athenians and the Peloponnesians broke the Thirty Years Truce which had been made after the capture of Euboea. As to the reasons why they broke the truce, I propose first to give an account of the causes of complaint which they had against each other and of the specific instances where their interests clashed: this is in order that there should be no doubt in anyone’s mind about what led to this great war falling upon the Hellenes. But the real reasoning for the war is, in my opinion, most likely to be disguised by such an argument. What made war inevitable was the growth of Athenian power and the fear which this caused in Sparta.“

Allison coined the term ‘Thucydides Trap’ to describe the idea that when one great power is rising it will inevitably threaten to displace the established power, consistently resulting in war.

Allison believes that this doesn’t have to be the case, and David C. Kang, Professor of International Relations at the University of Southern California who spoke with Big Think recently, also believes that the Thucydides Trap must be avoided at all costs.

Throughout time, the Thucydides Trap has been reenacted multiple times across the world stage. Allison writes that over the past 500 years, of 16 documented cases where one rising power threatened to displace a ruling one, 12 resulted in war.

We’re all unconsciously familiar with this phenomenon. If you’re an American, it’s part of the history that’s celebrated every year: The United States rebelled against the British Empire and war was waged in the 18th century, a victory that led to America overtaking Britain as the world’s dominant superpower in the 20th century. 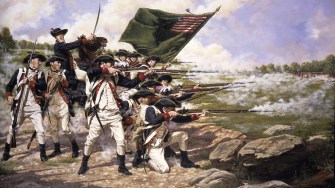 While there are lingering fears that China’s rapid economic and political growth will leave us in a similar state of competition and warfare, many great thinkers believe that we can avoid this trap. Professor Allison thinks we can avoid war with China by taking into account five lessons from the Cold War:

Leaders must realize that all-out war spells the end of the human race when it comes to superpowers with nuclear weapon stockpiles. This is planetary suicide and there won’t be any game theorists or policymakers left to debate the outcome.

Even so, military men in Washington and Beijing must play through these wargames in their minds in order to keep the risk of total annihilation a thought that must never be acted upon. They must both do their best to deter potential actions that could lead to this world-ending situation. This same idea must be applied between all nuclear powers, which makes it relevant for curbing any battle between nuclear superpowers.

Policy, or “precarious rules of the status quo” as President John F. Kennedy called it during the Cold War, must be enacted to ensure arms-control treaties are upheld and mutual guidelines might limit any future cyber attacks or border disputes between allies. Also by ensuring domestic performance and international policy are on the forefront, our diplomatic channels will always be open with a rising power. Thus we can reduce the challenges of the Thucydides Trap arising once more.

Allison believes that this will lead to more prosperous times in America and around the world—particularly at a time when he believes America needs it the most. In Destined for War: Can America and China Escape Thucydides’s Trap?, Graham Allison states:

“I am a congenital optimist about America, but I worry that American democracy is exhibiting fatal symptoms. DC has become an acronym for Dysfunctional Capital: a swamp in which partisanship has grown poisonous, relations between the White House and Congress have paralyzed basic functions like budgets and foreign agreements, and public trust in government has all but disappeared.
These symptoms are rooted in the decline of a public ethic, legalized and institutionalized corruption, a poorly educated and attention-deficit-driven electorate, and a ‘gotcha’ press — all exacerbated by digital devices and platforms that reward sensationalism and degrade deliberation. Without stronger and more determined leadership from the president and a recovery of a sense of civic responsibility among the governing class, the United States may follow Europe down the road of decline.”

There is some scant evidence that proto-diplomatic practices existed in some of the earliest of civilizations. We do know that the Romans used envoys to spread their messages in the late antiquities. 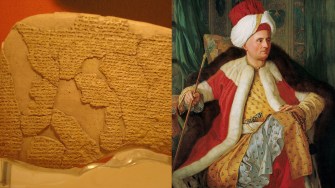 Left: The Egyptian–Hittite peace treaty, between the New Kingdom of ancient Egypt and the Hittite Empire of Anatolia. Right: A French ambassador in Ottoman dress, painted by Antoine de Favray, 1766, Pera Museum, Istanbul.

One notable instance of early diplomacy was between the Pharaoh of Egypt and rulers of the Hittite Empire in 1274 BCE. There is evidence on a stone tablet that a peace treaty was signed between the two rulers and it is considered one of the first known international peace accords.

Some of our earliest foundations of modern diplomatic practices can be traced to medieval Europe and beyond. In nation-states that were emerging during the 14th to 16th century (in the early days of the Renaissance) diplomacy was beginning to be conducted between ambassadors and consuls of different countries. These professional diplomats would eventually form into the ambassador practices we use today.

Furthermore, the Italian city-states began to develop new forms of diplomacy as their empires grew richer and stronger. For example, a city state such as Milan would send a resident diplomat on a mission with a clear code of conduct. This was a new way of thinking about intrastate and international relations. Italian diplomatic culture began to lead the way forward as these missions would become the equivalent of our modern permanent resident diplomatic missions.

There have been many false starts and stops with the future of a globalized network of peaceful interaction. For example, after World War I the impetus to join the League of Nations with the herculean efforts shown by President Woodrow Wilson were largely ignored by opposition in the Senate. The onset of World War II would prove that this was a failed endeavor for striving towards world peace.

Eventually, the United Nations was created with the hope that it would ensure diplomatic international cooperation on a global scale. It now boasts over 193 members and it just could be one of the ways we deal with future clashes between nations.

The UN’s mission to ensure peace between nations has been challenged throughout the years, but arguably upheld as we have never experienced a massive all-out war between two superpowers.

As a result of international governing bodies like the UN and increased communication lines between foreign powers, we’ve slowly built up a world political apparatus that can withstand potentialities of war. The Thucydides Trap is just that—a potential trap, but not a destiny.

A theory of history says America is in the grips of a crisis called “The Fourth Turning” that will change it forever.