Anarchists are typically thought of as violent terrorists, planting bombs or smashing shop windows. While not all anarchists espouse the use of violence, it would be disingenuous to say that it hasn’t been a significant part of the political philosophy’s history. The so-called propaganda of the deed—the idea that an action (a violent, terroristic action) can serve as a kind of call to arms for revolution or to encourage enlistment in a movement—has popped up in anarchist history countless times, and its use is obviously controversial. Here are just 5 instances throughout history of anarchist plots. 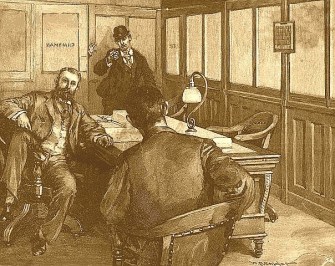 By 1892, the Amalgamated Association of Iron and Steel Workers (AA) was in full control of the Homestead steel plant, one of the largest and most productive plants owned by Carnegie Steel. Andrew Carnegie, though generally in favor of unions, believed that AA had grown too powerful, and hired Henry Clay Frick—notoriously anti-union—to “reorganize the whole affair.”

The AA was due to renegotiate its agreement with Carnegie Steel on June 30, 1892, but negotiations quickly broke down. Frick cut wages, ceased negotiating with the union, evicted workers from their company homes, and fortified the steel plant with barbed wire, high walls, sniper towers, and high-pressure water cannons. For its part, AA staged a strike.

AA strikers were preventing nonunion strikebreakers from entering the plant, so Frick hired 300 Pinkertons to assist him in breaking the strike. It’s unclear who shot first, but a battle quickly broke out in what was one of the bloodiest disputes in American labor history.

As the strike went on, Emma Goldman and Andrew Berkman, two anarchists running an ice cream shop in Worcester, Massachusetts, decided that this was their moment to incite workers to violent revolution. They decided that they would commit an act of propaganda of the deed—Berkman would do the deed by assassinating Frick and Goldman would work on the propaganda.

Berkman traveled to Frick’s office and shot him twice in the neck, but Frick survived. Berkman was apprehended and sentenced to 22 years in prison, while Goldman escaped punishment. The assassination attempt quickly turned public favor away from the strikers, and soon Frick had what he wanted: A union-less steel plant. 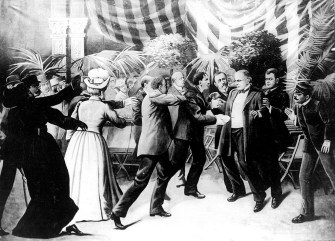 An illustration of Leon Czolgosz shooting President McKinley with a pistol concealed by a handkerchief.

After the assassination attempt against Henry Clay Frick, Emma Goldman became an active and influential anarchist. She coordinated with other anarchists, wrote extensively, and made several speeches on anarchism.

One of these speeches inspired an out-of-work factory worker called Leon Czolgosz to become an anarchist. He attempted to make friends with Goldman and her peers, but they believed him to be a police spy. Between Goldman’s speeches and the anarchist assassination of King Umberto I in 1900, Czolgosz became determined to assassinate then-President William McKinley.

President McKinley was attending the Pan-American Exposition in Buffalo, a world’s fair that featured a variety of exhibits celebrating technological and cultural achievements. In the Temple of Music—a center for live performances—McKinley was shaking hands with citizens. It was a particularly hot day, and a number of the President’s well-wishers held handkerchiefs. Czolgosz did as well, although his concealed a .32 caliber pistol.

When he approached the President, Czolgosz shot him twice point-blank. As the President collapsed, Czolgosz cried out “I done my duty!” before he was immediately beaten by all nearby bystanders. This would have continued had McKinley not said, “Go easy on him, boys.”

Czolgosz was quickly sentenced to death. McKinley died of his wounds 9 days later. The assassination marked a shift in American attitudes towards anarchism—which was already looked down upon to begin with. In the aftermath, Emma Goldman and several anarchist friends of hers were arrested, but later released due to a lack of evidence connecting her to the assassination. Public opinion, however, was very much turned against her, and newspapers referred to her as the “high priestess of anarchy.” 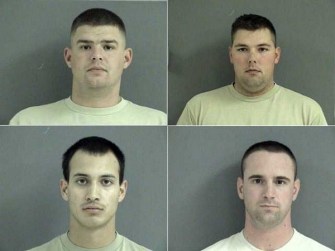 3. The plot to assassinate Obama

Though anarchism may have been more in vogue in the 19th and early 20th centuries, the 21st century still has its fair share of anarchists. In 2012, four US Army soldiers planned to assassinate President Obama in order “to give the government back to the people” and incite a revolution.

Their group, which they called Forever Enduring Always Ready or FEAR, had collected $87,000 worth of arms, ammunition, and explosives. The group’s leader, Isaac Aguigui, had lost his pregnant wife the year before but was receiving a half a million dollars in insurance money because of it, which he used to fund his venture. Later, he would be charged with her murder. With their weaponry, they intended to seize control of Fort Stewart, bomb targets in Savannah, Georgia, and ultimately assassinate President Obama.

In order to keep their plans a secret, the group shot and killed Michael Roark and his girlfriend Tiffany York, former members of the group who had taken money from them and planned to leave. Ultimately, the murder led to an investigation by the army, which eventually uncovered the plot. Three members of FEAR were sentenced to life in prison, while one soldier received a lighter sentence for his cooperation with investigators. 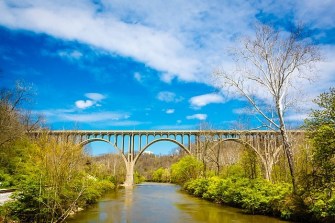 The route 82 bridge that the anarchists intended to bomb.

In 2012, five young but radical members of the Occupy Cleveland movement expected to see Cleveland’s Route 82 bridge explode after texting a detonation code to C4 they had strapped to the bridge’s foundations previously. But… nothing happened. The C4 they used had been fake, sold to them by an FBI agent in coordination with another undercover informant who had penetrated the group for seven months.

Using the Anarchist Cookbook as a guide, the group had planned to bomb a number of targets, such as the Cuyahoga County Justice Center, the Cleveland Federal Reserve Bank, a casino, and an unidentified Ku Klux Klan stronghold, but these were all eventually abandoned.

The group was sentenced to between 8 and 11.5 years prison for the plot, much less than one would expect for intending to bomb a bridge and kill innocent civilians. The reason for this was because the FBI informant, Shaquille Azir, encouraged the group to continue in a way that bordered on entrapment. He facilitated much of the anarchist group’s work, supplying them with money, providing contacts for the weaponry, pointing out targets, and generally keeping the group on track whenever their plans devolved into chaos. 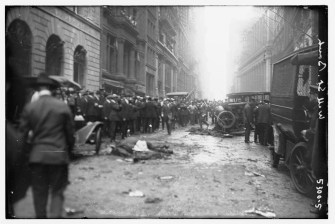 Aftermath of the Wall Street bombing.

Perhaps the group most famous for its propagandas of the deed were the Galleanists, followers of Italian anarchist Luigi Galleani. Galleani became an anarchist in college, and afterwards bounced around the world in a series of deportations for his actions until he landed in the United States.

Galleani was a charismatic leader and very much invested in the use of violence to achieve his political goals. Fellow anarchist and bomb-maker Carlo Buda said that, “You heard Galleani speak, and you were ready to shoot the first policeman you saw.” Under his leadership, the Galleanists bombed numerous targets between 1914 and 1920, including a failed attempt at a letter bomb intended for John D. Rockefeller and a series of bombs during 1919 against a variety of targets—all of which failed.

But the most famous instance of Galleanist terrorism was the 1920 Wall Street bombing. A horse-drawn carriage containing 100 pounds of dynamite and 500 pounds of cast iron intended as shrapnel was detonated in front of the J.P. Morgan bank in the New York financial district. The intended target was unknown, but it was almost certainly not the 38 civilians who died that day.

The Galleanists never claimed responsibility for the attack, but the modern consensus is that they were responsible. Luigi Galleani had just been deported the year before, and two anarchists, Sacco and Vanzetti, suspected of being members of the Galleanists, had just been wrongfully convicted in what the public and future historians consider a gross miscarriage of justice. In the ensuing investigations, the FBI failed to make their indictments stick, and nobody was ever caught for the crime.

Detective fiction reveals how a particular society or time period looks at crime and criminal justice.
The Present

Bitcoin is often derided as volatile, but a new report suggests there is a method to the madness.
Neuropsych

A new study found that people who scored high in certain psychopathic traits are more likely to limit head movements.
The Present

How to reduce gun violence without taking people’s guns

Hospitals often deal with the aftermath of gun violence, but they can play a key role in preventing it.
▸
5 min
—
with
Michael Dowling
The Past

How the CIA used LSD to fight communism

Before it fueled Woodstock and the Summer of Love, LSD was brought to America to make spying easier.
Up Next
The Present

What socialism is — according to Bernie Sanders