There’s an unsettling trend among young American men without a college education: Many can’t find work, or don’t want jobs at all.

The numbers paint a dreary picture. Between 2000 and 2015, employment rates for lower-skilled men in their twenties dropped from 82 percent to 72 percent. In 2015, about one-fifth of them reported having not worked at all in the past 12 months. And, for the first time in decades, they’re more likely to live with their parents than a romantic partner.

It begs the question: What are these guys going to do when they enter their 30s and 40s without solid career experience? 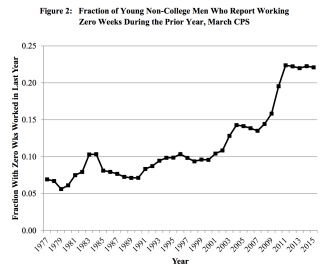 Despite the uncertainty, they actually report being happier than they were 15 years ago. So what’s making them content to stay out of work? Better video games, says Erik Hurst, an economist at the University of Chicago who co-authored a study on this shift in the labor supply:

“We have determined that, in general, [lower-skilled young men] are not going back to school or switching careers, so what are they doing with their time?” Hurst asked in a recent interview with the university. “The hours that they are not working have been replaced almost one for one with leisure time. Seventy-five percent of this new leisure time falls into one category: video games.”

“These individuals are living with parents or relatives, and happiness surveys actually indicate that they are quite content compared to their peers, making it hard to argue that some sort of constraint, like they are miserable because they can’t find a job, is causing them to play video games.”

The study claims that factors like the recession or decreased demand for low-skilled labor don’t fully account for this group’s lost work hours. Rather, leisure time is becoming more valuable as video games improve and become more affordable.

“People have switched so much time, more time than we would have predicted, to computers and video games, and our model attributes that to technological progress,” Hurst said to the Chicago Tribune.

Young lower-skilled men spent about 8.6 hours gaming per week from 2011 to 2014, compared with 3.4 hours from 2004 to 2007. Sure, pretty much everyone has been playing more video games. But people with high-wage jobs game less. The reason might be that gaming time represents a higher opportunity cost to them, while people with low-wage jobs and no discernible career path might be more willing to trade work for play.

“When I play a game, I know if I have a few hours I will be rewarded,” said 22-year-old gamer Danny Izquierdo to the Chicago Tribune. “With a job, it’s always been up in the air with the amount of work I put in and the reward.”

Why spend so much time gaming?

Job or no job, gaming can be rewarding.

The regular release of dopamine poses a problem, though.

Excessive gaming seems to lead to arousal addiction, which is the addiction to experiential stimuli. Pornography addiction works the same way. And unlike drug addicts who crave more, arousal addicts want different. 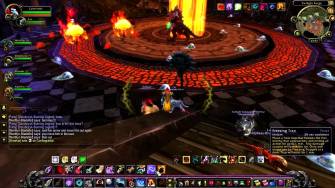 In a recent interview on NPR’s Fresh Air, author Adam Alter described how gaming companies use big data to capitalize on gamers’ cravings. The process is part marketing, part behavioral psychology. Alter explained how the designers of World of Warcraft run A/B tests on game missions to see what customers prefer:

What they’ll find is, for example, when you have to save [rescue] something, you spend more time playing than say, when you have to kill or find something. So what they’ll do is they’ll take the missions that aren’t as successful and they’ll cast them aside, and now they’ll form three new versions of saving missions. They’ll continue that process through generation after generation after generation. So what you’re left with after, say, 20 generations is this weaponized evolved version of the game, or a weaponized evolved mission, that is maximally addictive.

Optimizing a game to be addictive might not be a big deal if it’s a one-time purchase. But designing addictive games that can bleed players’ wallets dry poses different ethical questions.

Alter said the industry might want to consider establishing something like a Hippocratic Oath – a “do no harm” standard – as technology evolves.

The implications of virtual reality

If Hurst and his colleagues are right, and modern video games are already keeping so many young men out of work, then how will the advent of virtual reality affect the U.S. labor supply? Right now, there’s only speculation. Still, it seems safe to assume that everyone – not only young low-skilled men – might soon face a confounding trade-off: spend more time at work, or more hours in a virtual world of endless entertainment.

Nikolaas Tinbergen’s concept of “supernormal stimulus” explains why humans are attracted to a heightened version of reality.
Learning Technologies

VR training is the future. Here’s why, and how companies are using it

The time to begin exploring VR training is now. Here are the pros, cons, and different ways this technology can be utilized.
Neuropsych

Until recently, video games were accused of killing brain cells. Now, researchers are trying to understand how they help players get smarter.
Neuropsych

If love is an addiction, your first love is the first dose.
The Future

Think of a combination of immersive virtual reality, an online role-playing game, and the internet.
Up Next
Hard Science

The European Geosciences Union predicts that over 70% of glacier volume in the Everest region could be lost by 2100. One man has engineered a solution so that life in these regions can go on.