Despite the gloomy forecasts of some fiscal analysts in recent years, Warren Buffett predicts Americans will enjoy economic prosperity for generations to come.

In an editorial for Time, Buffett outlines an argument for why he believes annual GDP growth of 2 percent, the rough average of recent years, will “work wonders” for the American public over the long term. (Most recently, the New York Federal Reserve estimated in December 2017 that the U.S. GDP in the fourth quarter was about 3.98 percent.) The reason has to do with population growth relative to GDP. 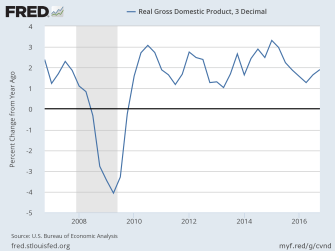 Buffett, who was born in 1930, goes on to illustrate how virtually all modern Americans have access to luxuries—entertainment, medicine, education—that even the richest Americans didn’t have a century ago. 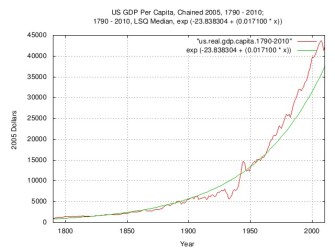 This massive increase in standard of living was the result of innovation and productivity, Buffett wrote. But it came at a cost.

“To all this good news there is, of course, an important offset: in our 241 years, the progress that I’ve described has disrupted and displaced almost all of our country’s labor force,” Buffett wrote. “If that level of upheaval had been foreseen—which it clearly wasn’t—strong worker opposition would surely have formed and possibly doomed innovation. How, Americans would have asked, could all these unemployed farmers find work?”

Here, Buffett seems to be drawing an implicit connection to modern Americans’ fear of losing jobs to automation.

Buffett goes on to suggest that disruption is what allows standards of living to improve drastically over time.

“We know today that the staggering productivity gains in farming were a blessing. They freed nearly 80% of the nation’s workforce to redeploy their efforts into new industries that have changed our way of life.

You can describe these developments as productivity gains or disruptions. Whatever the label, they explain why we now have our amazing $59,000 of GDP per capita.”

Still, disruptions in industry and labor have left large swaths of the American workforce in relative stagnation, Buffett argues:

“The market system, however, has also left many people hopelessly behind, particularly as it has become ever more specialized. These devastating side effects can be ameliorated: a rich family takes care of all its children, not just those with talents valued by the marketplace.

In the years of growth that certainly lie ahead, I have no doubt that America can both deliver riches to many and a decent life to all. We must not settle for less.”

The Seychelles magpie-robin is up for sale – yes, for sale – as a digital nature collectible.
The Present

By slowing down aging, we could reap trillions of dollars in economic benefits.
Up Next
Technology & Innovation

Why SpaceX’s Falcon Heavy Is Such a Big Deal

SpaceX unveils its most powerful rocket.