Climate change is reversible – that’s the view of 80% of Chinese people, according to a report from the European Investment Bank (EIB).

That level of optimism isn’t, however, a global phenomenon. Large numbers of people in the EU and US believe there is nothing that can be done. Northern Europeans, in particular, share this concern; approximately 40% of people in France and Poland think we have gone beyond the tipping point, compared to just over one-quarter in Italy and Spain. 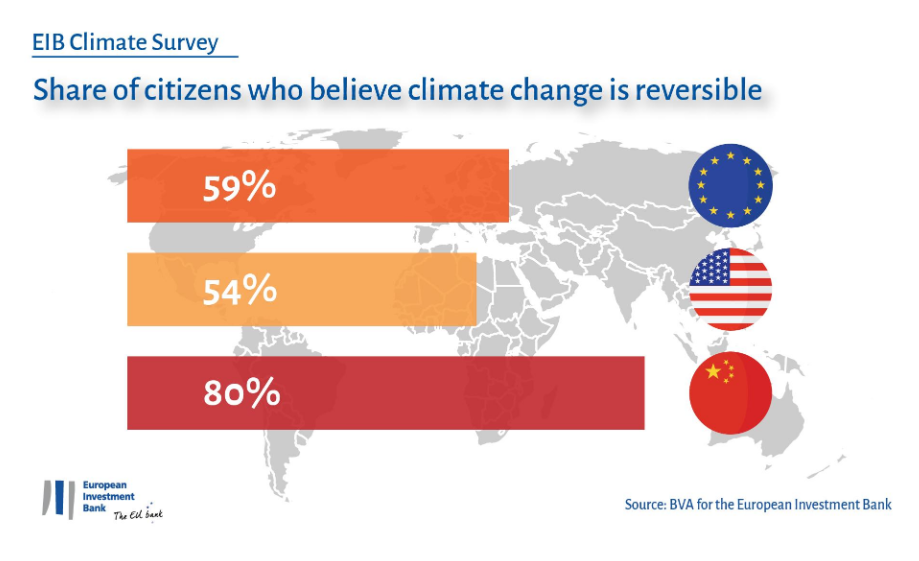 Across Europe, 47% of people view climate change as the biggest challenge in their lives. Healthcare and health services (39%) and unemployment (39%) are ranked as the second biggest challenges to society, with political instability, terrorism and cyberattacks further down the list.

There are regional variations. Southern Europeans regard unemployment as their greatest problem, while according to the EIB, those in Austria, Denmark, Germany, the Netherlands, and other Northern European countries are more worried about the climate.

In China, the level of concern is even higher than in Europe, with 73% worried about the climate crisis. In the US, 39% view it as a major threat. 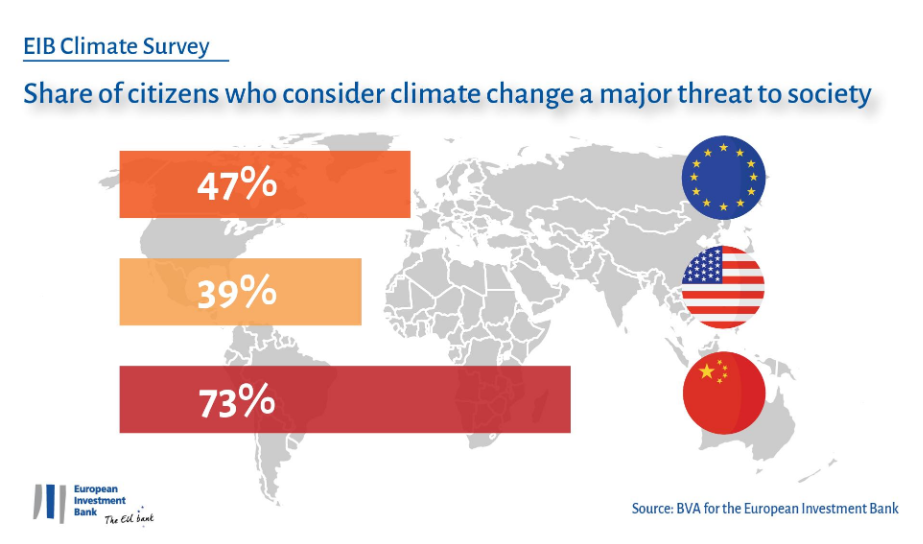 Climate change has a wide-ranging impact, affecting everything from agricultural yield volumes to flooding and coastal erosion. In mid-2019, hundreds of thousands of people were affected by floods in Bangladesh that were described as among the worst ofrecent years. The country is low lying, and home to the Ganges river delta and many other smaller rivers. Changes in sea level are likely to affect Bangladesh and other coastal parts of the world disproportionately.

It says the two most likely threats are extreme weather and the failure of concerted efforts to affect climate change. These are also in the top three risks felt to have the most significant potential impact. 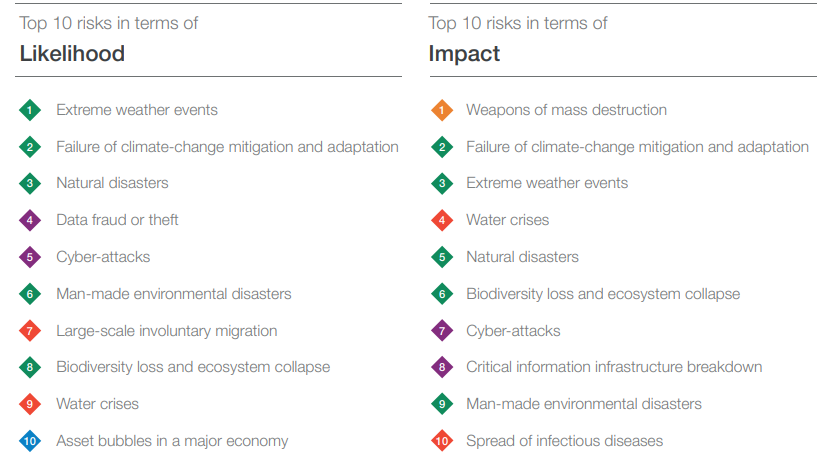 The climate crisis could make itself felt through many different risks and threats (Image: The Global Risks Report 2019)

The EIB surveyed 30,000 people from 30 countries. One of its key themes was climate-induced migration. Throughout Europe, 82% of respondents revealed that they think climate change and extreme weather events will force people to leave their home countries.

Almost one-quarter (24%) of Europeans think they will relocate to another country because of climate change, with 41% of younger Europeans saying it’s likely they will move. While 33% of Austrians aged between 15 and 29 anticipate making such a move, more than one-half (51%) of similarly aged Spaniards are prepared to move.

Tags
climate changeglobal issuesnatural disasterresourcessocietyweather
In this article
climate changeglobal issuesnatural disasterresourcessocietyweather
Related
The Past
How “gate” became the syllable of scandal
In terms of sheer productivity, “-gate” has no peer. Wikipedia’s list of -gates has over 260 entries.
Videos
Is reality real? These neuroscientists don’t think so.
Reality is more distorted than we think.
▸
with
Big Think
Surprising Science
Glow-in-the-dark milky seas of maritime lore really exist – satellite proves it
To date, only one research vessel has ever encountered a milky sea.
Life
Tornado detection: bringing Stone Age tech into the 21st century
Technology designed to listen for atomic bombs can also hear tornadoes.
The Present
Controversy: was the Caribbean invaded by cannibals?
A 2020 study has revived a longstanding controversy over Christopher Columbus’ claims of marauding cannibals in the Caribbean.
Up Next
Hard Science
How long will a volcanic island live?
Plate tectonics and mantle plumes set the lifespan of volcanic islands like Hawaii and the Galapagos.