Walking is good for you. Regular walks can improve bone health, reduce blood pressure, and even prevent Alzheimer’s. You’re supposed to get in 10,000 steps a day, but millions of people across the United States don’t manage that. The average number of strides an American takes daily is just 4,774. This has dire effects on our health. 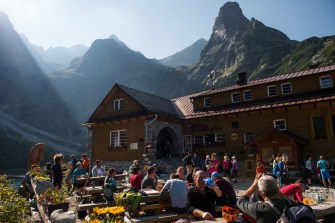 Hikers in Slovakia pause to rest as they take in the beauty of the mountains. Gros tells us that they are getting more out of the trip than just exercise and a holiday.

But a book by French philosopher reminds us that there is more to walking than exercise.

In his book A Philosophy of Walking, French philosopher Frédéric Gros explores the surprisingly philosophical act of walking. He doesn’t mean the light exercise that people try to fit into their busy schedule or our pragmatic walking from point A to point B, but rather the long hikes in nature that give us a chance to escape the day to day.

For Gros, walking is a liberating act that allows us to reconnect with ourselves. Not ourselves as we are introduced at parties or as the face we put on to make it through a long day at the office, but our true selves liberated from worrying about time, social conventions, and our daily cares. A long walk through a forest allows us to connect with the sublime in a way that merely looking at it from a distance does not. Appropriately done, walking allows us to just be in a way that can be hard to come by in our modern, fast-paced lives.

He explains this in a very French manner when he says:

By walking, you escape from the very idea of identity, the temptation to be someone, to have a name and a history. Being someone is all very well for smart parties where everyone is telling their story, it’s all very well for psychologists’ consulting rooms. But isn’t being someone also a social obligation which trails in its wake – for one has to be faithful to the self-portrait – a stupid and burdensome fiction? The freedom in walking lies in not being anyone; for the walking body has no history, it is just an eddy in the stream of immemorial life.

And he speaks for many hikers when he explains how one can find more life in doing nothing than is often found in a hectic, event filled schedule.

Days of slow walking are very long: they make you live longer, because you have allowed every hour, every minute, every second to breathe, to deepen, instead of filling them up by straining the joints.

As he does prefer hiking over going on a walk in the city park, he says that what urban dwellers out for a walk actually do is “stroll,” explaining that:

The urban flâneur does experience walking, but in a way far removed from Nietzsche or Thoreau. Walking in town is torture to the lover of long rambles in nature because it imposes, as we shall see, an interrupted, uneven rhythm.

But even this has meaning for him. He invokes Walter Benjamin and declares the urban walker to be “subversive” with respect to the urban phenomena of “solitude, speed, dubious business politics, and consumerism” in that they relish the anonymity of the crowd, are going nowhere fast, and see advertisements and sales like everybody else but manage to stroll past them.

Even if you can’t go hiking down a winding country trail regularly, walking can have a philosophical benefit for you by placing you both within and without the modern metropolis.

Plus, walking was a vital part of many philosophers’ processes.

Professor Gros mentions several great thinkers who took long walks, explaining their habits and how it related to their work.

He opens with Nietzsche, who was an avid walker. Originally used as a way to avoid the crippling pain of his migraine headaches, Nietzsche later found that his thought was stimulated by the long walks he took past rivers, forests, lakes, and Alpine peaks. He found walking a vital part of his process saying,

We do not belong to those who have ideas only among books, when stimulated by books. It is our habit to think outdoors — walking, leaping, climbing, dancing, preferably on lonely mountains or near the sea where even the trails become thoughtful.

His walks were a source of inspiration, and it is no coincidence that his most productive era was when he lived Sils Maria and was able to hike through the Alps. He only ceased his walks when his physical and mental health deteriorated, and he was forced into a wheelchair.

Immanuel Kant was also a regular walker, with an emphasis on regular. He took his daily walk at precisely five every day, and his neighbors were said to set their clocks to his routine. He only deviated from this rigid schedule twice, once to buy a book and once to join a rush to a newspaper publisher to get news on the outbreak of the French revolution.

Unlike Nietzsche’s hiking, however, Kant’s walks were not a direct part of his writing process. They were instead part of his extremely fine-tuned routine that he credited for his philosophical output. The walking was for his physical health, which he took pride in, and a chance not to have to think for a few minutes. Given his incredible output, the breaks were well deserved.

Outside of philosophy, many geniuses have understood the benefits of walking. According to local lore, Beethoven regularly took long walks in the Vienna Woods when he lived in Mödling, Austria in search of inspiration, and he often carried pens and paper just in case he found it. Charles Dickens enjoyed a walk when he couldn’t sleep and saw walking as a way to keep himself sane.

Perhaps it’s time to stop looking at walking as a way to get from A to B or as a light exercise and start viewing it as something more fundamental — a chance to more fully connect with ourselves, nature, and take a break from the hustle and bustle of everyday life. While not all of us can take five-hour treks like Nietzsche, most of us can find the time for a stroll in the park.

Perfectionism is on the rise, and its consequences for mental health can be devastating. The Japanese philosophy of “wabi sabi” can help.
Up Next
Hard Science

The first human esophagus grown in a lab