Imagine a Satanist. If you’re like most Americans, that mental image comes ripped straight off an Iron Maiden album. Skull goblet filled with a wine-blood highball. Of course. Undulating dagger waved menacingly over a sacrificial infant. Naturally. A love for black robes and eye-catching accoutrements, like some monochromatic Liberace. Joking aside, that last one may check out. (We’ll get to why later.)

Point is, popular conceptions of Satanism have as much in common with actual Satanism as a Chick tract does with critical thought. B-movies, rock albums, talk shows, the occasional moral panic, they have all colored our perception of this movement and its history.

Despite the intense amount of worry people have over Satan worship, the religion as we know it today has more in common with the counterculture of the 1960s than the covens and maleficia of the 1660s.

A depiction of an English witch being being carried to hell by Satan. This 1555 woodcut was carved around the time “Satanism” entered the English lexicon. (Photo: Wikimedia Commons)

Of schisms and Satanists

The terms “Satanism” and “Satanist” can be traced back to the 1560s — not as a religious designation one ascribed to oneself, but as a way of describing someone with a “satanic disposition.”

In Children of Lucifer: The Origins of Modern Religious Satanism, religious historian Ruben van Luijk notes the term latched onto our cultural lexicon during the European Wars of Religion. During this series of conflicts, Christians fought other Christians for well over a century until the Peace of Westphalia in 1648.

As such, van Luijk points out, Satanism was originally an epithet, and it wouldn’t come to describe the “intentional, religiously motivated veneration of Satan” until the end of the 19th century.

How we know right from wrong without God or religion

A poisoned dinner at deviant’s palace

In time, people borrowed the Satanist label as their own, but it’s still difficult to speak to a coherent, comprehensive Satanism until the 20th century. It wasn’t a single movement bound by a shared institution or religious text. Satanists were and are highly individualized people with significantly different reasons and views on what their religion entailed. Still, there are themes that create historic trend lines to map out.

At times of hardship and despair, peasants would sometimes turn to Satanism as a means to defy the ruling class. Satan is, after all, the ultimate rebel in Christian mythology. With church and state intertwined for much of European history, Satanism was the ultimate anti-establishment party. Other times, upperclassmen would turn to Satanism as a means to break from society’s rules and norms, perhaps wholeheartedly, perhaps for decadence and titillation.

But more often than not, Satanism remained an accusation heaped on others. During the Affair of the Poisons, the French people’s imaginations combined anecdotal, yet high-profile, poisoning cases with a fear of witchcraft. The pursuing panic and investigation saw people of all classes denoted as witches and Satanists to be banished, imprisoned, or executed.

Even those close to King Louis XIV were not immune. Athénaïs de Montespan, the King’s favorite mistress, was accused of holding “a bloody black mass” where she bewitched the King through demonic rites. She escaped further persecution, but others were not so lucky. 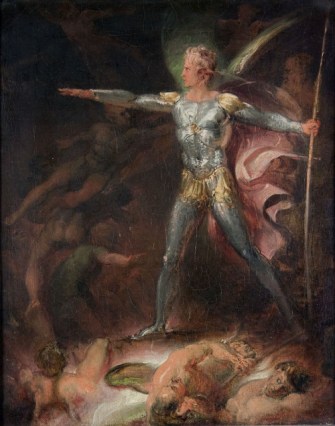 In modern Satanism, Satan is often seen as a metaphoric figure who opposes tyranny and irrational beliefs. This painting, by Thomas Lawrence, shows a warrior Satan summoning his legions. Image source: Wikimedia Commons

Sympathy for the devil

Contemporary Satanism took hold with Anton LaVey. In 1966, he founded the Church of Satan in — where else? — San Francisco. He would go on to publish The Satanic Bible in 1969, and it is his brand of Satanism that probably has the farthest reach on modern culture.

LaVey’s Satanism is atheistic* and described as a “carnal religion.” Followers believe that all gods are fictious and that ultimate importance is found in the self and pursuing self-interests. Like other gods, Satan is not a deity to venerate. He is instead a metaphor for the ultimate adversary of irrationality and religious beliefs. (The name “Satan” comes from the Hebrew for “one who opposes.”)

But what about the hierarchies, the accoutrements, the symbols, and black masses? Isn’t all that theater more than a little irrational? No, according to Peter Gilmore, high priest of the Church of Satan. In an interview with Point of Inquiry, he explains the reason behind these rituals:

“You can have secular symbolism, ritual, and pageantry, and it’s very effective and something that is part of the nature of the human animal. […] The ritual chamber can be a place where you can dramatically perform what I call ‘self-transformational psychodrama.’ We release the emotions that we find would be injuring us in the regular pursuit of our happiness so that we can then let them go.”

But the Church of Satan isn’t the only contemporary Satanist institution. The Satanic Temple has become well-known for its extravagant stunts of activism, such as unveiling an 8-foot tall statue of Bephomet at the Arkansas State Capitol building.

While the Church of Satan adds a ritualistic veneer to an Objectivist philosophy, the Satanic Temple sees social engagement and improvement as critical to its beliefs. Rather than evangelizing a devil-may-care attitude, they seek to find a balance between the individual and society. As Lucien Greaves, spokesperson for the Satanic Temple, explained to IndieWire:

It’s not that we’re just looking for disorder, chaos, and to undermine Western civilization. In fact, we’re trying to really endorse for Enlightenment values, bringing reason and respect for science into bettering the human condition.

The Temple’s seven tenets speak to this worldview. For example, they ask followers to act with compassion, to respect the freedom of others, and to take care that beliefs don’t distort scientific facts. Hardly the creed of a cinematic bogeyman. They also view Satan as a metaphor for the ultimate rebel against tyranny.

For now, that’s where we’ll place the bookmark in this (short) look at Satanism’s history. Satanists are not a group of people worshiping a cosmic villain for evil’s sake. Today’s Satanists are antiauthoritarian, albeit theatrical, freethinkers who see in Satan a mythical, heroic figure. If we can understand that, maybe we can save ourselves a future moral panic or two.

* However, much like Christianity, Satanism isn’t one-size-fits-all. We explore atheistic Satanism here, but there are theistic Satanists, who believe in a spiritual being. And according to van Luijk, they can even worship deities alongside Satan, such as Loki, Set, or Kali.

Successful forgers are remembered as great conmen, not artists. This is strange, considering their forgeries fooled even the most seasoned critics.
Up Next
Life

New study ranks the animals we fear most. Here’s what they are.

The animal we fear most? Spiders.