James Citrin is one of the world's foremost executive recruiters. He leads Spencer Stuart's North American CEO Practice and is a core member of the firm’s Board practice as well.[…]
Go to Profile
Videos

Executive Recruiter James Citrin highlights how job applications are evaluated by companies, and offers inside tips from building a resume to impressing at an interview.
▸
9 min
—
with
James Citrin

Job hunting is one of the more frustrating things to do in life. While many companies offer online job applications, it can feel almost useless to send in a resume to the deep portal of a submission box. When there is no response, after weeks of waiting, it can feel like a waste of time and effort, and make the job hunter’s sense of worth plummet. Two-thirds of all jobs are gotten by personal referrals, so where does that leave the unconnected among us?

It takes a certain mindset to go into a job interview and come out on top. James Citrin, executive recruiter and author, has spoken before to Big Think about the three factors that need to be considered for any potential job prospect. He also points out that everyone needs a place to start off – the pinnacle of your career will be a result of whatever stepping stones you take along the way, so you just need to get it started any way you can. Working is better than waiting.

The jumping off point for any application is of course the resume. Citrin says as you start to get your feet wet in the job hunt, you should keep your resume at just one-page long, max. New grads aren’t likely to have a lot of job experience, but what they do have can neatly fill up one page, with internships, high school employment, and what experiences school has given them. No accomplishment is too small if it shows a valuable job skill like dedication or a level of responsibility, even if it was just shoveling snow or mowing lawns.

Something else to note is one of the main questions any job interviewer is likely to ask: why do you want this job? No employer wants to hear that it’s for the money. Of course the main point of a job is to feed yourself, but the employer wants to hear how this is a passion for you, that it’s the opportunities you’re looking for, or that the company has ideals that you support. An employer understands that people want money, but they can get a paycheck from other companies, too. The goal is to impress this particular company, and stand for more than just self-interest.

Citrin explains that career progression isn’t always going to be a direct move up the ladder, so manage your expectations and look for the value in each new role. Each company is going to offer different experiences. You may have to move laterally or slightly backwards at a new company, to get further in the long run. If the new company is going to teach you something the last company didn’t, it’s a good thing. From there, you can have a broader view of the world, and have more skills and experience to offer. 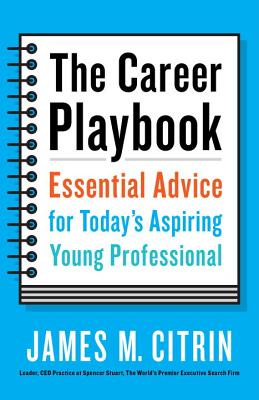 James Citrin: So let's talk about the tactics of searching for a job today. Some of the tactics are quite different, but some of the principles are absolutely timeless. Some of the tactics that are different: LinkedIn. LinkedIn is an essential resource for potential employees and employers. It is the de facto global standard for 400 million people in business, part of the reason why Microsoft paid $26.2 billion for the global LinkedIn network. But LinkedIn is a really essential thing to do and filling in and completing a good LinkedIn profile is an essential step. You want to have a really good professional but personable picture on it because pictures are more valuable than all the words. And then you want to have the equivalent of a top-level resume in all of your affiliations, your titles and your interests. So the LinkedIn profile is key. Most likely that's going to be how you get a job, but when you're in a job conversation employers will refer automatically to your LinkedIn profile so that's really important.

Before you do a LinkedIn profile it's important to develop a resume. Coming out of college you generally want to have your resume on one page. All the resume basics, there's millions of things written about resumes, but I will tell you one thing, I probably evaluated 20,000 resumes over the last 25 years. Here's how people read resumes. They look at your name and the mindset is do I know her or him or not and where are they based. And then they quickly look to the bottom of the page and they look at the personal things. And this is where it's really in your power to differentiate yourself. You don't want to say capable at Microsoft Word and Excel and PowerPoint, the Adobe suite Photoshop things, that's fine but that's the place where you want to say completed the world triathlon championship or hiked Machu Picchu or enjoy cooking and specialize in Mexican tequila recipes. Traveled to whatever, very specific things, member of the League of Women Voters, if you're a guy. It creates a little bit of a question that's a real entrée into the conversation.

And employers are looking to start a conversation to say you had three holes in one in golf, how did that happen? And it's on the bottom of your resume. So that's the next thing. And then the basics: what the company or the organization or the education is, the year, a couple of the quantifiable basics, internships. And it's okay, especially if you're coming out of college, to be totally real. You mowed lawns for the summer or you bussed in a restaurant. All of those things, which is actually someone in their 20s you might think oh God I didn't learn anything, I didn't do anything, but employers are looking for those real life skills to show work ethic and initiative and they respected that. If you're a camp counselor that's fine too, but talk about what the experience you gained being responsible for a bunk of seven-year-old girls. Anyway, it's okay to be yourself and put that in the kind of context. So have a resume.

After the resume it's easier to create your LinkedIn profile from that. It used to be that resumes were sent with cover letters through the mail. They would get opened or not and they would get filed. It's important to know that most of resumes certainly will be read as a first time, if they're read at all they'll be opened most likely on a mobile device. So the layout is really important. And if you're writing to an HR leader, human resources later, maybe they'll be reading it in their office, but they'll be transmitted electronically. So the principles of a cover letter are a transmittal email. And an email is not a text but an email is not a formal letter either so it's somewhere in between. It's got to be professional, make sure to have a no grammatical errors in your resume or on your transmittal email. So those are basic.

But here's the thing, over two thirds of jobs are gotten through referrals; they're not gotten by applying cold to an organization. And it's really frustrating for people, I know this, to like look at an employment site; go into the jobs listings about us and it says submit your application or submit your resume or LinkedIn profile and a cover letter and you do that. And it feels like you're putting your personal materials into a black hole. Many great companies find a way to have the systems to get back to you, but most don't. It's just hard because they get too many inbounds. But here's the thing, most positions are filled before they ever go to be listings and sometimes companies feel the need or for legal reasons that they have to list of them. Two thirds of the jobs are gotten through referrals. So with that in mind, and having done your basics of a good LinkedIn profile and a resume, here's the way to activate that. And this is a timeless principal about job searching at the entry level all the way up to the CEO suite. It's recommendations by your friends or your friends of friends.

And I often get asked what is the single best piece of job search advice I have? And here's what I say: have a crisp answer to the question so what do you want to do? Especially people coming out of college, they're sometimes surprised by that question and they're - like the worst answer is I don't know. The second worst answer is I'll do anything. You want to be able to help people help you. And so you want to have a one sentence answer to that question of what you want to do that makes sense and give someone enough ammunition so that when they hear that there's an opening at the American red cross it's like oh I just met this really talented young woman who's coming out of John's Hopkins University who is dedicated to helping disaster relief and she wants to work at the American Red Cross. Maybe it's your aunt who you mention that to at the Father's Day picnic. You never know where it's going to come from. So I like to think that it's like planting seeds on the wind and sometimes they'll land and they'll grow roots. So had your one sentence answer. And anything is fine, but you really need to say I've always loved the financial markets; I want to get an entry-level position on Wall Street. I'm interested in government; I majored in political science and I want to break in with a legislative internship. I'm really passionate about protecting the environment so I want to find a not for profit dedicated to prevent global warming.

I love gender equality. I'm looking for a company that is really focused on empowering women. Whatever it is have the answer to that and then say that to as many people as you can and you'll be shocked at when it comes from. And this is where it pays to mention that to your professors, to your parents, to the friends of your parents and to your friends and most of this will come back. And then your LinkedIn profile and your resume will get kicked in. But unless you give someone the tool to say I'm looking to break into online video production, nobody will come back and ask you that. So anyway, that's my single best piece of job search advice.

The secret to gaining the upper hand in negotiations, with a former FBI negotiator