Scott Barry Kaufman, Ph.D., is a humanistic psychologist exploring the depths of human potential. He has taught courses on intelligence, creativity, and well-being at Columbia University, NYU, the University of[…]
Go to Profile
Videos

The Science of Creativity: How Imagination and Intelligence Work Together in the Brain

The great myth of the left brain versus right brain personality types has been popular for years. Even comedian Bo Burnham has turned this classic cliché into a successful song for his tour. As the story goes, the left brain is reserved for logic, analytics, and other brow-furrowing things, while the right brain is all about being creative. So a person who was very creative would say, oh, I’m right-brained, while someone who is more into scheduling would say, I’m left-brained.

Scott Barry Kaufman, Ph.D. and scientific director of the Imagination Institute, has put his foot down on the myth, and called it just that. In fact, he claims you can’t harness one side without enlisting the help of the other. It takes creativity to invent, and make something new, and it takes a certain calculated-ness to schedule long hours, trying to figure out how to make the invention work. For example, Leonardo da Vinci, one of the most famous artists in the world was also a brilliant inventor. His sketches of his flying machines, and fetuses developing in the womb are beautiful to look at, with expressive detail, but they’re also brilliantly designed.

The brain is interwoven, with no committed left side or right side usage. Parts are connected through various brain networks that criss-cross the brain to communicate and get the best function of the brain in various situations. One of these is the Executive Attention Network. This is what allows you to hold onto many pieces of information at once. When a person is studying for a test, this network allows them to remember what they’re studying, why they’re studying, the methods used to study, and when they need to finish. When it comes to creativity, the Executive Attention Network is also responsible for inhibiting the most obvious ideas that spring to mind, and instead it digs deeper to see what a second or third idea might bring – these are usually the more creatively developed versions of an idea, and it’s something improv artists are usually very good at.

Then there’s the Default Mode Network, which Kaufman prefers to call the Imagination Network, because it’s the inwardly focused network that kicks in when the immediate environment surrounding us is not stimulating or engaging enough. This is the network responsible for daydreaming, tuning out, and also a lot of creative musing.

Furthermore, it takes creativity to be sympathetic for another person. The ability to imagine oneself in another person’s shoes is important to interpersonal relations, and allows us to be empathetic. This is imagination and creativity. While schools tend to prize science and math over creative skills, these things are important. It’s how we daydream, and how we improvise. Perhaps it’s time to invest in our imagination networks.

Scott Barry Kaufman’s book is Wired to Create: Unraveling the Mysteries of the Creative Mind. 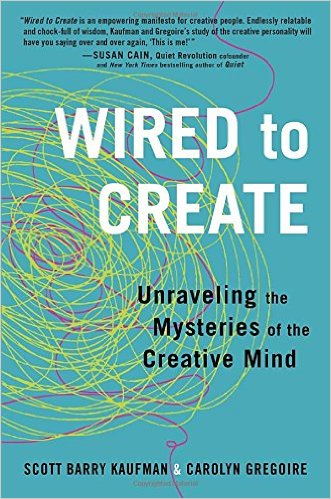 Scott Barry Kaufman: It’s useful to distinguish between intelligence and imagination. They are different constructs as we would say. So I like to view intelligence as all the things, all the thought processes, behaviors that allow us to learn what is. Learn the way the world is. Whether or not it’s in a classroom situation and we have to use our learning skills to understand the material that’s being taught to us or we’re reading something and we have to comprehend what we’re reading or we have to observe things. And a lot of that draws on this Executive Brain Network, our ability to focus and to synthesize information in our heads at one time and remember them. So that’s all the things involving our ability to learn what is. Imagination are all the processes that allow us to imagine what could be. So I like to see these as overlapping traits but not completely overlapping. So a lot of creativity requires to learn what is so that we can go beyond it. But if we’re just at the stage of learning what is, so we just have the knowledge I don’t think knowledge necessarily equals creativity. So creativity requires both intelligence and imagination. Creativity requires our ability to know what has come before so we can stand on the shoulder of giants. But it also requires the ability to have great foresight and vision to imagine the world the way that it could be. And when we combine the two I think that makes it much more likely we’ll have creativity.

So many of you might have heard of the left brain/right brain myth about creativity that the left brain is not related to creativity much at all because it’s really boring and logical and super serious and analytical. And that the right brain is where all the artistic beauty comes out and it’s very poetic. And I’ve seen like ads like – I think I saw a Ford ad that had like left brain/right brain where it kind of makes this distinction and stuff. Well the reality is that creativity involves interaction of lots of different brain networks that rely on both the left side and the right side of the brain. And all brain network is, is that when you have lots of different parts of the brain that are communicating with each other to solve a certain task then it’s called a brain network. And you find that creativity draws on multiple interacting brain networks and in particular it draws on three brain networks that seem to be absolutely essential to creativity across whatever field it is, whether or not it’s science or it’s art.

One of those brain networks that’s important is what’s called the Executive Attention Network. And the executive attention network allows you to integrate lots of information in your head at one time. It holds stuff in your working memory. Maintain strategies that you’re currently working on at one time so you don’t forget what your strategy is or forget what you already did and then redo it. The Executive Attention Network is also helpful for inhibiting obvious responses or the first things that come to your mind. And so creativity is important to access remote associations. So the Executive Attention Network is going to be helpful to inhibit the most immediate, obvious things that come to mind. People who are very good improv artists, for instance, the first thing that comes to their mind is usually not the most creative so they tend to wait for the second or third thing and that’s one of the improv activities. So the second major brain network that’s important is the Default Mode Network but I like to call it the Imagination Network because it’s very active, it’s highly active every time we turn our attention or focus of attention inward and we focus on our daydreams. We focus on our future goals, on when we’re trying to take the perspective of someone else.

So it’s very important for having compassion for someone else because it allows us to imagine what someone else is thinking or feeling. And so that’s the imagination brain network. And the third major brain network that’s important for creativity that I think is a very underrated brain network, it’s called the Salience Brain Network. And that’s associated with what is most salient in our environment. What is most interesting to us. Before we think through consciously about a creative activity, and even before we activate our imagination, there’s a process before both of that where we have a subconscious process where the Salient Brain Network tags things as interesting or not interesting in our environment. And it either feeds it to our Imagination Network or to our Executive Attention Network to pay attention to. So that’s where daydreaming comes from. So daydreaming is associated with the activity and the imagination brain network. And if our salience network tags something as extremely not interesting in our environment, in our immediate environment, it’ll pass the baton to the imagination network and that’s when we start daydreaming and we start like tuning out to the current environment. But creativity involves the interaction of all three. It’s when we’re captivated by the moment or mindful but we’re also imaginative and we’re also motivated and passionate to engage in the creative activity.

Hey Bill Nye! Can I Have Superpowers?