Franklin Delano Roosevelt (1882-1945) was the 32nd president of the United States and longest-serving president, serving from 1933 until his death in 1945. He was president throughout much of the Great Depression of the 1930s and the United States’ involvement in World War II during the 1940s. He is also well-known for the New Deal, a set of programs for relief, recovery, and reform that expanded the U.S. government’s role in managing the economy.

“A nation that destroys its soils destroys itself. Forests are the lungs of our land, purifying the air and giving fresh strength to our people.” 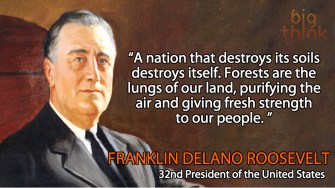 What is the EPA currently doing to build support for environmental awareness? Who better to tell us than its chief, Gina McCarthy:

Personal attacks on a speaker, especially about their funding, are a sign that the attacker can’t dispute the facts the speaker is presenting. Beware the attacker too.