Below you’ll find some words of wisdom from Abraham Lincoln, 16th U.S. president and familiar $5 facade man. The basic gist: The American government is designed so that popular opinion rules the day. We see this in play during campaign season when politicians who wish to keep their jobs attempt to align themselves with the values and beliefs of their constituents. Ostensibly, the country’s direction is dictated by the will of the people.

But Lincoln acknowledges a flaw. Public opinion is not firm and resolute; it’s malleable. Whoever can control what the public thinks can swoop in and take control of the American government. Good ol’ Abe never experienced the 24-hour news cycle or viral videos or any of the other tools at the disposal of deep-pocketed influencers, but he was certainly familiar with the power of propaganda and misinformation.

In a way, this ties into another Words of Wisdom post from last week: FDR’s argument that democracy cannot thrive without a well-educated voting populace. The somewhat obvious defense against the saboteurs of public opinion is to steel oneself against their influence. Unfortunately, that’s easier said than done. 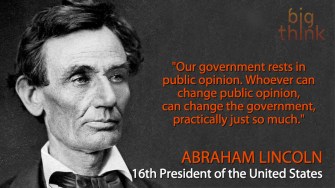 SAT Scores Hit a Low Point, but Test Maker Has a Solution

SAT scores are the lowest they’ve been in a decade, so we’re making the test easier to take. What does that say about our data-obsessed culture?