José Martí (1853-1895) was a Cuban national hero and an important figure in Latin American literary history. In his short life, Martí was a poet, essayist, journalist, revolutionary philosopher, translator, professor, publisher, and political theorist. Through his writings and political activity, he became a symbol for Cuba’s bid for independence against Spain in the 19th century, and is referred to as the “Apostle of Cuban Independence.” His death was used as a cry for Cuban independence from Spain by both the Cuban revolutionaries and those Cubans previously reluctant to start a revolt.

Martí held staunch humanist believes and adhered to values that specified the intrinsic worth of mankind. His words of wisdom below illustrate those values. They also stand as a powerful statement against the social ills of discrimination. It’s one thing to call racism, sexism, and other forms of prejudice bad. It’s another to ascribe to them the label of “sin,” given that the human experience serves as substitute for the holy and divine. We commit the worst possible acts when we act on our inclinations to divide the masses. We stain the fabric of humanity when we seek to tear people down. Powerful words from a powerful historical figure. 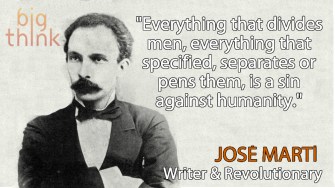 Below, the late Oliver Sacks chats about the marriage between medicine and humanism: