José Martí (1853-1895) was a Cuban national hero and indelible figure in Latin American literary history. He was a poet, publisher, journalist, essayist, translator, revolutionary philosopher, professor, and political theorist. He was celebrated as a symbol for Cuba’s bid for independence against Spain and is regarded as the “Apostle of Cuban Independence.”

Not too long ago, we used this space to discuss the amorphous nature of liberty, a word that resonates much more in people’s hearts than in their heads. The always-cerebral José Martí was able to pin down what liberty meant to him:

“Liberty is the right of every man to be honest, to think and to speak without hypocrisy. … A man who obeys a bad government is not an honest man.” 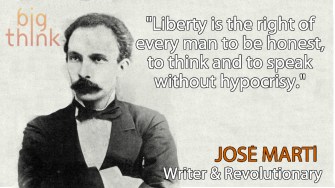 We Must Equip Our Youth to Thrive in a Changing World

Words of wisdom from FDR: “We cannot always build the future for our youth, but we can build our youth for the future.”