Sherman Alexie (b. 1966) is an American writer and poet who has been one of the leading voices in the Native American arts community the better part of two decades. Author of books such as The Absolutely True Diary of a Part-Time Indian, Reservation Blues, and The Lone Ranger and Tonto Fistfight in Heaven, Alexie draws from his experience growing up on the Spokane Indian Reservation in eastern Washington state. Alexie’s works often explore themes of despair, poverty, violence, and alcoholism among the lives of Native American people, both on and off the reservation.

Alexie is the source of today’s Words of Wisdom. The following quote demonstrates his advocacy for societal exploration. Not everyone is made to go out and be adventurous, but it certainly worked for him: 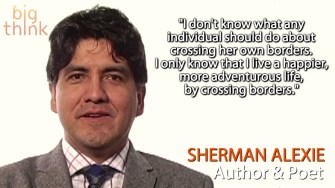 “I don’t know what any individual should do about crossing her own borders. I only know that I live a happier, more adventurous life, by crossing borders.”

Alexie is also one of our many Big Think experts, having participated in several Big Think interviews in 2009. Here’s one of our favorites, in which he explains that he doesn’t have favorite authors, only favorite ideas:

Your brain is your most powerful sex organ. Here’s why.

Researchers attempt to distill the science of dirty talk, submissive sexual activity, and the overall nature of arousal.