Émile Zola (1840-1902) was a French writer, the most well-known practitioner of the literary school of naturalism and an important contributor to the development of theatrical naturalism. He was a major figure in the political liberalization of France and in the exoneration of the falsely accused and convicted army officer Alfred Dreyfus, which is encapsulated in the renowned newspaper headline J’accuse. Zola was nominated for the first and second Nobel Prize in Literature in 1901 and 1902.

Zola’s words of wisdom below were originally written in support of Dreyfus, but the message within them is universal: 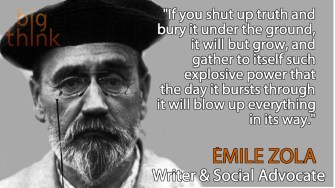 “If you shut up truth and bury it under the ground, it will but grow, and gather to itself such explosive power that the day it bursts through it will blow up everything in its way.”

Speaking of truth (and, almost necessarily, of freedom as well), Chinese artist Ai Weiwei shares his thoughts below on the Internet’s truth-spilling effect in China:

Why Béla Bartók Would Have Hated American Idol

Words of wisdom from the great composer and pioneer of ethnomusicology: “Competitions are for horses, not artists.”