What does God look like? In our culture, we often see images of an older white man with a flowing beard. This image has been remarkably consistent and can be found in works from Michelangelo’s The Creation of Adam to The Simpsons.

But, if you pressed them, how many people would say that is who they think of when they pray?

Luckily for us, new research shows us precisely what American Christians think God looks like.

In a study done at The University of North Carolina at Chapel Hill, researchers Joshua Jackson,Neil Hester, and Kurt Gray had 511 American Christians go through images of composite faces and rank them on which looked the most like God as they imagined him. They then combined the winners to create the image that was deemed “most God-like” by their subjects.

Behold the face of the American God. 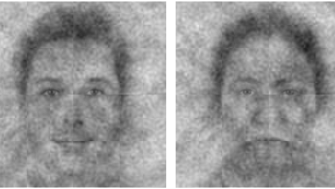 The Almighty, pictured on the left, and his opposite. (Jackson et al.)

It was also pointed out in this article that the face on the left, which is a somewhat generic Caucasian one, resembles Elon Musk.

The research team then broke the study subjects into groups based on their race, age, perceived attractiveness, and political leanings and made composite images of their results. The face of God changes rather dramatically based on who is looking.

Notice the differences between God as seen by the young and old. 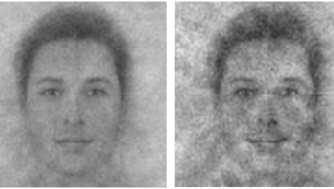 This is how liberals and conservatives see God. 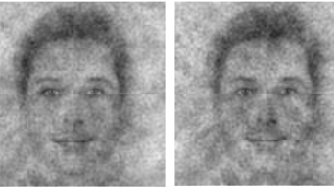 First what freedom means, then language, now what God looks like? The left and right really can’t agree on anything! (Jackson et al.)

But, why? Why are the images so different?

The results show that people think God looks like them. People were extra egotistical about their age and perceived attractiveness, and their God reflects it.

The results also show that people also tend to give God features that align with them mentally. In the above image of God as seen by Liberals and Conservatives, the traits that both sides desire were manifest. The conservative God is older, more masculine, and more powerful; while the Liberal’s god is more feminine and loving.

As the scientists explained:

In some cases, we imagine God as the hero needed to solve our problems. As the researchers put it:

People who lack control in their lives tend to see God as more powerful and influential as a form of compensatory control. People who feel threatened by intergroup conflict conceptualize God as more authoritarian and punitive, since this kind of God could better regulate a society at war…. And people with a strong need for a secure attachment tend to view God as more loving to provide themselves with an attachment figure. Together, these perspectives suggest that people ascribe traits to God that help fulfill salient motivations.

This tendency to manifest mental traits in imagined physical features goes beyond images of God. The authors of the study make references to other research that shows how we project our assumptions about people’s minds onto their faces:

How has the internet taken the news?

Reply tweets on co-author Kurt Gray’s feed ranged from surprise to pedantic critiques of the terms used in the study. Most press coverage has been more positive, exploring the motivations of the different groups that influence how they picture the Almighty, while also pointing out how bland the composite image of God is.

What doesn’t this study tell us?

The study only included American Christians, so we don’t know how Americans of other faiths view God or how Christians of other nations do. While the researchers had nine different dimensions of variances to study in both the participants and their view of God, there is no reason to think their list is exhaustive.

Lastly, while the test subjects represented a broad swath of American society, there was no attempt to break them down into groups based on denomination; the chances that different dominations have wildly differing notions of God is low, but still an exciting aspect for future study.

So, there you have it. Americans think God looks like them and has the traits they like to see. While this egotism might seem uniquely American, it is just the continuation of thousands of years of projection on our part. For as the ancient Greeks gave their gods power over the natural world, strong physiques, and an all too human nature, we Americans have made also made God into a mix of what we are and what we would like to be.

New Stars Turn Galaxies Pink, Even Though There Are No ‘Pink Stars’

A color you’ll never find in a star is responsible for the universal color of star-forming regions.If you look through a telescope’s eyepiece, distant galaxies always appears white.Spiral-shaped galaxies, so […]