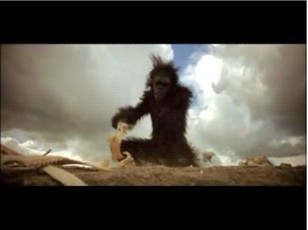 n Do you ever see corporations doing innovative things they shouldn’t, theoretically, be doing? Usually, it starts with an employee in the front ranks, changing the way he or she interacts with customers. From there, the practice can spread throughout the organization. Customers and partners immediately wonder if it’s just some kind of glitch – or whether it’s one of those serendipitous changes that will soon become hard-wired into the company’s DNA.

Anyway, the same types of things happen in nature all the time. The Associated Press, for example, recently carried a tale of chimpanzees that use spears to hunt small animals — something they simply aren’t supposed to be doing:

“Researchers have witnessed a chimpanzee skewering a lemur-like creaturenfor supper, but it’s unclear whether the spectacle was a bit of luck ornan indication that chimps have a more advanced ability to hunt than wasnthought. A team led by Iowa State University anthropology professor JillnPruetz witnessed the spearing of a bushbaby in Fongoli, Senegal, duringnan observation of chimpanzees from March 2005 to July 2006.

In a studynbeing released in the online version of the journal CurrentnBiology, Pruetz documents 22 cases of chimps using spear-like tools tonhunt bushbabies — a small primate that lives in hollow branches or treentrunks. “It’s not uncommon to have chimps use tools. But to use them in the context of hunting” is nearly unheard of, she said.”

Anyway, this story of the chimpanzees who hunt reminds me of the opening scenes of Stanley Kubrick’s movie “2001: A Space Odyssey,” in which a giant ape-like creature at the Dawn of Man discovers that the giant bones of the woolly mammoth can become a hunting instrument. As Kubrick hints, it’s only one small step from using a bone as a hunting instrument to becoming an evolutionarily-advanced species capable of exploring the cosmos.