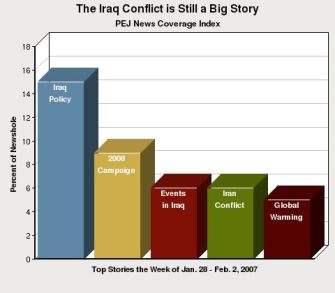 Back in February, I chronicled the problems that the year’s first IPCC report had in achieving wider media and public attention. In response, I argued that in today’s fragmented media system, relying on traditional news coverage to attract the attention of the wider public just wasn’t good enough.

As alternatives, I suggested recruiting and training a national system of opinion-leaders or “science navigators” to connect to fellow citizens on the topic, while also harnessing the power of entertainment media and celebrity culture to reach the massive audience of Americans who pay little or no attention to news about either science or public affairs.


Last week it was a new IPCC release, but similar story when it came to its media impact.


According to the latest Pew analysis, global warming only accounted for roughly 5% of the total news hole, far short of the combined attention to Iran, the 2008 Horse Race, and Iraq.

Even the partisan split at the Supreme Court on the EPA’s regulation of greenhouse gases didn’t elevate news attention to the issue much. In absolute terms, global warming is enjoying record amounts of news attention, yet it still doesn’t register as prominent on the overall news agenda. Indeed, last week was only the third week all year where the issue broke into the top ten of news agenda items as tracked by Pew.

Related
Life
Visualization test
Lorem ipsum dolor sit amet, consectetur adipiscing elit. Nullam id tincidunt mi. Morbi malesuada nulla sit amet est hendrerit tincidunt. Etiam viverra, nisl id volutpat eleifend, est augue sodales orci, […]
L&D Strategy
Transfer of learning: The necessary step to make learning stick
Transfer of learning is a concept that should be top-of-mind when planning any learning and development program. Why? In a perfect world, the billions of dollars organizations collectively spend every […]
Starts With A Bang
Why we’ll never see back to the beginning of the Universe
We thought the Big Bang started it all. Then we realized that something else came before, and it erased everything that existed prior.
Thinking
Is there an afterlife? See how your answer compares to polled Americans
There is more consensus on what heaven looks like than hell.
Thinking
How science changes the way we think, according to 10 leading scientists
A group of prominent scientists shares how research has changed them.
Up Next
Guest Thinkers
Proximity as Bias in Coverage of the World’s Hurricane Problem
Over at The Intersection, Chris Mooney has a post up about the complete absence of U.S. news coverage dedicated to the record six tropical cyclones that have hit Madagascar, killing […]