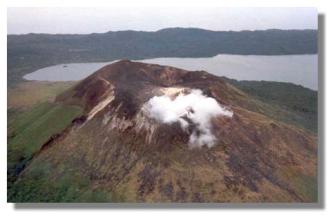 A 1995 photo of Gaua volcano in Vanuatu.

A few weeks ago I mentioned that there were signs that Mt. Garet, part of the larger Gaua volcano in Vanuatu was potentially showing signs of a eruption – the first since 1982. It turns out that the rumbling and sulfur odors reported by local residents were correct and it appears that Gaua did indeed erupt. The latest report from the Geo-Hazard section of the Department of Geology, Mines and Water Resources in Vanuatu:

After the assessment of the Geohazards team on Gaua

volcano from 3-7 October 2009, it is confirmed that Mont Garet volcano is

going through an eruptive phase starting from the 27th of September 2009.

volcano each day, this means that a significant quantity of magma is

degassing from gaua volcano. The lake letas, localised close to the Mont

Garet volcano, is one of the biggest crater lake of South Pacific, its

river of the Waterfall.

With this information, the Alert level of this volcano is now raised to

Level 2 on the Vanuatu Volcano Alert Level (VVAL). This means that this

volcano is going through a minor eruption. It is not recommended to

approach the volcano. The danger remains in the red zone area on the hazard

waterfall. With the related alert level, a level of response from the

community is required. Geohazards is doing its best with the limited

No real indication in any of this about ideas of the extent of the eruption – sounds like it is just small explosive events so far – and a lot of sulfur dioxide. Another volcano to keep an eye on to see if the eruption escalates or that this is merely a transient event at Gaua.

Here’s your chance to ask a question to Dr. Jonathan Castro, one of the author’s of the new Nature paper on the speed of rhyolite movement during the May 2008 Chaiten eruption.