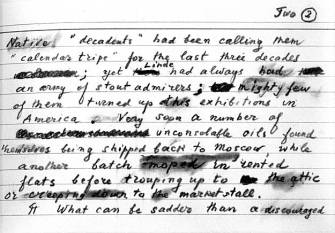 In the era of the social Web — when it’s possible to tweet, blog or status update every miniscule fact of one’s life — it’s fashionable to opine that every personal detail and inner thought should be made public. After all, if you’re not going to do it, someone else will. But just how far should you let people peek inside your creative process?

It’s a question that I’ve been pondering for the past 48 hours, having just completed Vladimir Nabokov’s posthumously published work, The Original of Laura. To make a long story short, Nabokov (pictured, left) passed away in 1977 and left strict orders to his family that the unfinished work that he was writing on his deathbed – what turned out to be The Original of Laura – should be burned upon his death if it had not been completed. Nearly 30 years later, Nabokov’s son Dmitri cobbled together his father’s meticulously numbered notecards and had the book published as “a novel in fragments.” In an ingenious piece of PR for the book, pubishing house Alfred A. Knopf actually included copies of Nabokov’s notecards as perforated pieces of pages of the novel. (If you pick up Nabokov’s novel at the local bookstore, the book weighs in at a hefty-looking 275 pages, but due to the double-sided notecards and the heavy stock of paper used to publish the book, there’s really only about 50-100 pages of content. A Nabokov-aholic can easily finish the book in under 90 minutes.)

What’s fascinating about Nabokov’s new book, of course, is that you actually see all of Nabokov’s words as they appear on his notecards – complete with smudges, cross-outs, words scrawled out in Russian and French (he was trilingual) and annotated notes to himself about titles of chapters and key points he wants to make about his characters. There’s one page of the book that’s a full-on discussion of the precise word that Nabokov would like to describe a female character (fille, in French) and how best to render that word in English, while keeping the connotations and meaning of the word in French. If you’re a scholar of Russian literature or a huge Nabokov fan, it’s a real treat to see the internal gearings of his mind at work.

If, however, you’re a casual Nabokov fan with only a passing interest in Nabokov’s wonderful facility for wordplay and his clever post-modernist literary devices, you’re bound to be disappointed. There appear to be re-thinkings of plot lines from Lolita (a character named Hubert H. Hubert and a nymph-girl named Flora), thin allusions to other Nabokovian themes and plot lines, and even misspelings (“bycycle”) that Nabokov’s son Dmitri did not see fit to edit.

At the end of the day, the creative genius of individuals is based, to some large part, on the ability to edit and harness the pure outflow of talent and imagination and put it into a format for others to appreciate. In the business world, it would be like a consultant showing up for a final client presentation with only a stack of note cards and some creative ideas about the points he/she would like to make, rather than a full-formed presentation deck that had been tirelessly rehearsed and edited. Clients are paying not only for the creative imagination that goes into the final recommendations and suggestions, but also for the discipline and rigor that goes into the final presentation deck.

Which is to say that I think there’s some part of the creative process that should remain hidden. What do you think?

[image: A notecard from “The Original of Laura”]

Saatchi & Saatchi: How to Win Friends and Influence Followers in 7 Minutes or Less

In a format reminiscent of PechaKucha 20 x 20 (20 PowerPoint slides in 20 minutes or less) events, Saatchi & Saatchi asked 7 of the world’s leading creative thinkers in […]