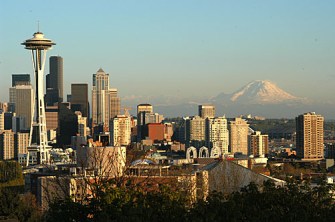 On Friday, I was in Seattle for our latest stop in the Speaking Science 2.0 tour. We were hosted by the University of Washington’s Forum on Science Ethics and Policy (FOSEP), the Dept. of Communication, the Pacific Science Center, and Town Hall Seattle. (I will have a post up later about how FOSEP serves as an innovative model for regional collaborations around science communication.)

The day started at 11am with a presentation I gave to about 60 faculty and graduate students on the communication dynamics of the stem cell debate. While I was wrapping up the presentation at the Student Union, Chris Mooney was in the studios at KUOW, appearing on the NPR affiliate’s The Conversation to discuss our visit (audio). After lunch, I met with several UW faculty including Leah Ceccarelli from Communication, Carl Bergstrom from Biology, and Kelly Fryer-Edwards from Medical History and Ethics.

At 3pm, we gathered with about 25 graduate students from FOSEP for an informal discussion of emerging issues in science communication. We then headed out with several graduate students for spicy Mexican seafood at Peso’s Kitchen and Lounge.

At 7, it was time for the marquee event, our joint IMAX theater presentation at the Pacific Science Center before an audience of about 180. The Scientist had shipped to Seattle about 400 copies of the October issue featuring the cover article on framing, and copies were distributed to attendees throughout the day.

After the talk, about 25 people headed to McMenamins Pub. I had the chance to finally meet Mark Powell from the Ocean Conservancy. Powell is quoted in the reader comment side bar of our article at The Scientist, and has this post up about our Seattle talk at his site Blog Fish. I also had the chance to share a beer with Brian Smoliak, a graduate student at UW in Atmospheric Sciences, who is trying to launch a science beat at the school’s daily newspaper. In today’s edition, Brian has this article up about Friday’s events.

Related
Life
Visualization test
Lorem ipsum dolor sit amet, consectetur adipiscing elit. Nullam id tincidunt mi. Morbi malesuada nulla sit amet est hendrerit tincidunt. Etiam viverra, nisl id volutpat eleifend, est augue sodales orci, […]
L&D Strategy
Transfer of learning: The necessary step to make learning stick
Transfer of learning is a concept that should be top-of-mind when planning any learning and development program. Why? In a perfect world, the billions of dollars organizations collectively spend every […]
Starts With A Bang
Why we’ll never see back to the beginning of the Universe
We thought the Big Bang started it all. Then we realized that something else came before, and it erased everything that existed prior.
Thinking
Is there an afterlife? See how your answer compares to polled Americans
There is more consensus on what heaven looks like than hell.
Thinking
How science changes the way we think, according to 10 leading scientists
A group of prominent scientists shares how research has changed them.
Up Next
Guest Thinkers
Re-cap on talks in Minneapolis
I’m back in DC after an all too short trip to Minneapolis. Chris Mooney and I flew in to speak at the annual meetings of the Association for Reproductive Health […]