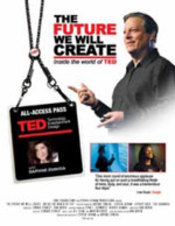 Saw this in GOOD magazine — Netflix (through its Red Envelope Entertainment subsidiary) has partnered with TED to offer a DVD of the 2006 TED Conference. Go behind the scenes with innovators like Jeff Han, Hans Roesling, the Google guys, and yes, Al Gore. Most, if not all, the clips have already been made available through the wildly-popular TED Talks series, but it’s nice to see the whole picture at one time:

“Join actress/host Daphne Zuniga now for the first-ever film about the influential TED Conference. The Future We Will Create: Inside the World of TED goes behind the scenes to give you the equivalent of a $6,000 all-access pass. You’ll be there alongside the founders of Google, Amazon.com and other celebrities. See presentations by the top innovators and visionaries in the fields of art, science and business. Experience the opportunity of a lifetime and enjoy a fascinating glimpse of the future. This unique journey of discovery, laughter and inspiration is a profound tribute to human spirit and ingenuity.”

Some of the most inspiring individuals in the film are young up-and-coming innovators like environmental justice pioneer Majora Carter of the South Bronx, who launched a green neighborhood project in one of New York’s least environmentally-friendly areas and eventually gained a personal audience with Al Gore himself.

Anyway, if you’re interested in attending a TED conference for the East Coast, check out the upcoming Business Innovation Factory event in Providence, Rhode Island on October 10-11.

[image: The Future We Will Create]