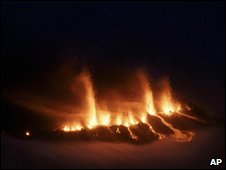 The fissure vent eruption on Eyjafjallajokull in Iceland on March 21, 2010.

The big news this morning is the eruption that started last night at Eyjafjallajokull in Iceland, producing a 1-km fissure vent. The pictures and videos I’ve seen so far have been quite impressive, with the classic look of a “curtain of fire”, where basaltic lava erupts explosively from a linear array of vents – you can see the geometry in the image from the BBC/AP (above). Especially clear is the dual nature of the eruption, with both the explosive fire fountains and the effusive (passive) lava flows from the root of the curtain of fire. In many “curtain of fire” eruptions on Hawai`i, the curtain (see below) eventually coalesces into a single fire fountain, sometimes producing fountains that can reach a few kilometers in height. This will be something to watch for in the coming days if the eruption continues.

Here is some video taken last night of the fissure eruption – impressive stuff! 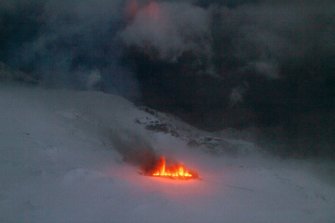 Daylight image of the 2010 eruption of Eyjafjallajokull.

Airspace over Iceland is closed for the moment, although these style of eruptions don’t produce much of volcanic ash – although there is likely significant fine droplets of lava forming some ash fragments, Pele’s tears and Pele’s hair (all basaltic volcanic products). However, eruptions like this can emit a lot of volcanic gases like carbon dioxide and sulfur dioxide – much like this eruptions distant relative, the Laki eruption of 1783. And even though the eruption is explosive, the hazard to surrounding communities is relatively low unless the lava flows encroach on populated areas or there is significant ice/snow melt to produce lahars or a jokulhlaup. However, Icelandic authorities have evacuated hundreds of people from the region near the eruption as a precaution (with text messages no less!)

There has been a lot of coverage of the eruption on the internet, much of it in Icelandic, but now various American and British news sources have coverage (some better than others) as well. Of course, there is already speculation floating around the web as well, with some reports saying that Katla is likely to erupt as well. There is also news that tourists are already expressing interest in visiting areas near the eruption to take a look.

{Hat tip to all Eruptions readers for many of the links in this post.}

Eruption started at Eyjafjallajökull in Iceland

We’ve been watching it for weeks, but it looks like tonight Eyjafjallajökull in Iceland has finally erupted for the first time since 1823.