On Saturday, the Sheraton New York Hotel & Towers hosted the first-ever public demonstration of Microsoft Surface, the digital interactive table with a 30-inch touch screen that might just revolutionize the way people think about computing. Microsoft Surface looks remarkably like a glass table, but is actually a computer capable of directing hotel guests to locations around the city, upload ing photos and videos, downloading songs, or even helping you order drinks at the bar.

I had a chance to drop by the event around noon on Saturday, and was impressed by the ease of use of the Microsoft Surface.

(I even had the opportunity to play Picasso, using a new paint application that Microsoft has developed for the table) In the Sheraton New York lobby, a mix of tourists, school kids and technology fans crowded around three Surface demo stations.  One big attraction was the prototype

Surface music-catalog/purchasing demo application, in which songs or entire albums could be effortlessly added to a Microsoft Zune. The drink-ordering

application also was popular among the Surface demo attendees, who could theoretically have points subtracted from a credit card or preferred guest card.

Anyway, for more press coverage of the event, check out the great ZDNet Photo Gallery of the event as well as a story in Sunday’s New York Daily News. 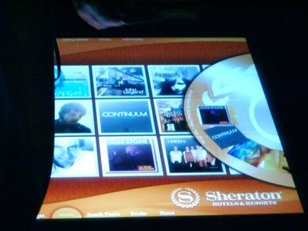 In addition, it looks like a number of bloggers also made it out to the event, recording their views and observations from the event over the weekend:

[images: Scenes from the first public demo of Microsoft Surface]