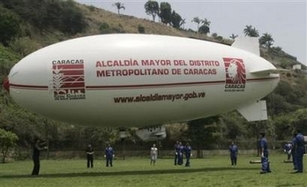 “Venezuela launched a Zeppelin on

Thursday to patrol Caracas, seeking to fight crime in one of

that President Hugo Chavez could be turning into Big Brother.

airship took its first flight, most people felt the unmanned

and carjackings. “It is a necessity,” said street vendor Pedro Marin when

asked about the 15-meter helium-filled blimp that had been

looming silently over his stall beside a busy highway.

command center. Police will be able to control the blimps

remotely, steering them over the city of about 5 million.

In the refined cafes of east Caracas, there was more

cynicism, condemning the blimps as a waste of money that would

not work in bad weather or at night, when Caracas is at its

most risky, resembling a shuttered-up ghost town. “It reminds me of 1984, of George Orwell. This is Big

Brother. It is not going to solve crime,” said Jose Luis, a

lawyer who declined to give his family name.”