Many of us who have ever dared to complain about the place we live in have heard the juvenile rebuttal “If you don’t like it, why don’t you leave?” As it turns out, sometimes people take that advice. When a country’s educated, intelligent, or entrepreneurial citizens take the advice all at once, the phenomenon is called “human capital flight” or “brain drain”.

Brain drain is pretty bad, and governments will go to great lengths to prevent it. Despite this, it can happen for many reasons almost anywhere.

How does it start?

As with all cases of emigration, there are push factors causing people to want to leave their countries, such as instability, political oppression, or lack of economic opportunity, and pull factors drawing them towards another country, such as better job opportunities, freedom, or political stability.

Often, the idea that the promise of lower taxes elsewhere is pulling all the talent out of one country and into another is proposed as the cause of brain drain by political leaders. The jury is still out on whether this is a significant factor for most people who do leave one country for another. Some papers say it is an important issue; others argue it isn’t.

What effects does it have on an economy?

That question is surprisingly difficult. It stands to reason that losing all your skilled workers at once would be devastating to an economy and a there is evidence to support that idea. It has been shown, however, that not all the effects are negative and that some countries benefit from sending their skilled workers elsewhere then hoping for remittances.

In any case, nobody likes to read headlines about all the educated people leaving the country in a hurry, and most societies consider brain drain to be dangerous. 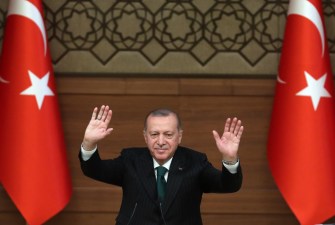 Turkish President Recep Tayyip Erdogan delivers a speech during a symposium on local authorities under the new presidential government system, at the Presidential Complex in Ankara, on January 9, 2019.

Where have brain drains happened?

Turkey is currently suffering a bout of human capital flight as the wealthy, talented, and educated rush for the exits. This has been caused by many factors, not the least of which is the increasing authoritarianism of President Erdogan and the mismanagement of the economy under his ever increasing control. This is particularly interesting because, until recently, the Turkish economy had been doing well. It shows how a country’s fortunes can turn around in a hurry given the right events.

Venezuela offers a similar case, with the well documented ‘Bolivarian diaspora’.This exodus, initially limited to the wealthy and well educated but now including members of the lower and middle classes, was at first driven by the revolutionary administration of Hugo Chavez and its heavy-handed, socialistic tendencies. After his death and the collapse of the Venezuelan economy, the number of people leaving skyrocketed as living conditions deteriorated.

Sometimes the causes and results of brain drain are even written into history. As right-wing political movements came to power in 1930s Europe, many famous intellectuals got out as fast as they could. Thinkers like Albert Einstein, Enrico Fermi, and Niles Bohr all took their brilliance to the United States where they could safely live and work. Later, East Berlin had such a bad brain drain problem that they built a wall to stop it. You might have heard of it.

How immigrants and their children affect the US economy | Robert Kaplan

What about America? Can it happen here?

Technically, America has brain drain already, but between different regions rather than to other countries.

Rural flight, the tendency for people living in rural areas to move to the cities, has been going on for a century now. The Great Plains region is particularly hit by this, with a long history of population declines and the exodus of young people.

Not to be outdone, the Rust Belt is also suffering from a loss of people and talent. This flight has been caused by many things including poor governance, a lack of economic opportunities, and the pull factor of other regions that are experiencing much faster growth.

However, on the national scale, the United States is still seeing a net influx of talented, well-educated individuals. There is a recognized problem in holding onto the students who come to the US for an education and then return to their home countries rather than stay and work here, but that is another issue. Some scientists and innovators have left the US as a result of recent policies, but these emigrants are still few in number.

However, as the examples of how quickly human capital flight can start show us, the risk is always there, and some problems could start driving the talented to greener pastures if they are aggravated. The American middle class is poorer than that of several other countries, including Canada and Australia. The poor in Europe are better off than the American poor. Our healthcare costs more and delivers less. Politically, well, things aren’t great when a third of the population thinks a civil war is imminent.

Is the U.S. at risk for a brain drain? Not right now, but the risk is always there. As the cases of Turkey, Germany, and Venezuela show us, it can take as little as a few difficult years to start the process. As the world becomes increasingly interconnected, and migration between different continents becomes ever more practical, the ability for anybody to pack up and move to greener pastures is enhanced. While things are going well right now, history shows us how quickly things can change.

An interactive “globe of notability” shows the curious correspondences and the strange landscape of global fame.

“This is much deeper than just ‘let’s figure out how we can get both sides to get along.’”
▸
15 min
—
with
Ian Bremmer
Up Next
Strange Maps

She met mere mortals with and without the Vatican’s approval.